Sam-A hoping to win a title on his kickboxing debut at ONE: ‘Mark of Greatness’

Sam-A Gaiyanghadao is set to make his kickboxing debut tomorrow night in Kuala Lumpur. But the 36 year old is no novice, having won a plethora of titles and tournaments during a Muay Thai career that has spanned nearly three decades.

That’s probably why he has been handed an immediate title shot despite his complete lack of kickboxing experience. Sam-A is challenging Wang Junguang for the right to become the promotion’s inaugural flyweight champion.

It means ONE: ‘Mark of Greatness’ will be a career landmark for Sam-A in more ways than one and he is hoping he will be able to adapt to the unfamiliar ruleset,

“I feel a little bit of pressure this time as it is the first ever time I have fought under kickboxing rules. I hope I can adapt straight away. I don’t usually clinch and knee too much in my fights so that shouldn’t be a problem, but I cannot use my elbows and they are one of my best weapons. We have been working hard in the gym though on the change of style.” 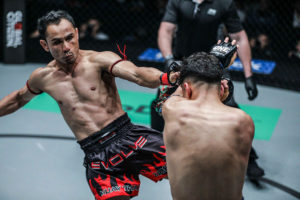 This will be Sam-A’s second fight as a strawweight. He previously held the promotion’s flyweight Muay Thai title but came unstuck at the hands of the far larger Jonathan Haggerty at ONE: ‘For Honor’.

At the time there was no strawweight division in the ONE Super Series. But once the option to drop down arose Sam-A had no hesitation in making the move,

“The flyweight limit was around the same weight as what I walk around at. I felt a little slower and more uncomfortable fighting at that weight, plus my opponents were always a bit bigger. Strawweight is closer to what I used to fight in the stadiums and I feel sharper and more comfortable at this weight.”

Sam-A made his strawweight debut in a Muay Thai bout earlier this year. Everything went according to plan and he’s not anticipating any issues this week,

“I have already had one fight at the weight under ONE’s hydration rules on ONE: ‘Century’ in Japan and it went well. As long as there are no problems there is plenty of time to rest with the day before weigh in, not like in Thailand where I used to have to weigh in on the day.” Sam-A is a multiple time Lumpinee and Thailand champion. He goes into most matchups as a strong favourite but is wary of his opponent’s kickboxing experience,

“I know it will be a tough fight for me as he is already used to fighting under the kickboxing ruleset. He has good movement and fast, sharp and heavy punches, so I cannot afford to take any chances or make any mistakes.”

He could have ended up competing in MMA like his team mates Saketdao Petphayathai and Dejdamrong Sor Amnuaysirichoke. Sam-A actually started training but had a change of heart when he realized there was a possibility to continue his Muay Thai career,

“When I first came over to Evolve to teach, I studied BJJ for around three months and thought about possibly trying some MMA fights. It wasn’t really for me though and when ONE started the Super Series fights I was more happy to go back and fight the way I do best.” 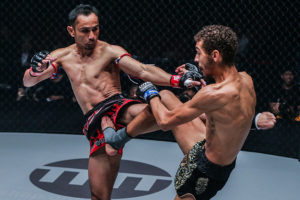 So Sam-A won’t be following in the footsteps of compatriot Stamp Fairtex by trying to become a three sport champion with the promotion. But he is determined to add a kickboxing belt to the collection.

Having celebrated his 36th birthday a couple of months ago there is no question that Sam-A is coming towards the end of his career. But ONE Championship has given him am opportunity to fight all over Asia and he is in no hurry for the experience to end.

Sam-A knows he can’t fight forever. But the desire to win titles is still there and he feels fit and ready heading into Friday’s fight,

“I still think I have a lot to give the sport and my body still feels in good enough shape to fight. I will know when it is not there anymore and it’s time to call it a day.”