There is a lot of anticipation ahead of Saygid Izagakhmaev’s ONE Championship debut. That is because the Russian lightweight will have former UFC lightweight champion Khabib Nurmagomedov in his corner.

Just like the undefeated Nurmagomedov he hails from Dagestan and wants to prove that fighters from that region are ‘different’,

“Dagestan fighters are different because we have a habit of fighting, wrestling, and competing. Competitive spirit is inherent to us,” he said. 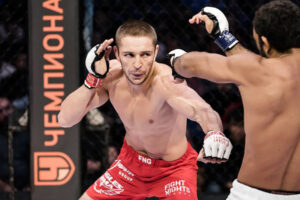 At ONE: ‘Heavy Hitters’ he faces James Nakashima. The American is a former welterweight title challenger but is coming off back to back defeats.

But Izagakhmaev feels he has been handed the toughest possible matchup on his promotional debut,

“I’ve already watched all of the top ten fighters in the division. I think the toughest of them all is James Nakashima, and I will try to approach this fight in my peak form.”

If you haven’t watched Izagakhmaev’s fights, and there are 21 of them, he can give you a very good indication of what to expect,

“My style is the same as Khabib, Islam Makhachev and many other guys from our gym. It is wrestling and binding to the opponent,” he said. The extent of Nurmagomedov’s influence on his career cannot be exaggerated. Izagakhmaev, who has a record of 19-2, has been learning from the lightweight legend since the start of his career,

“I grew up in front of Khabib. We receive a lot of instructions from him as our elder brother. We are always in touch. He controls our workout routine, and we plan to fly together to my fight in Singapore.”

He believes it is an advantage to have one of the greatest lightweights of all time in his corner,

“Of course, when you have such a phenomenal fighter and athlete as Khabib in your corner, zero losses, knows fighting better than anybody, if I make a mistake he will help me out quickly and give me a hint when to press, when to engage, and when to retreat.” But he firmly rejects the idea that this gives him some sort of unfair advantage over opponents. Izagakhmaev says he is quite capable of standing on his own two feet,

“I have 19 wins, and I was fighting alone in all of them. Nobody helped me and attacked my opponents on my behalf, which shows I can stand for myself on my own,” he said.

The bout with Nakashima does not appear to be a clash of styles. Both men are wrestlers and Izagakhmaev cannot see the American springing any suprises,

“I know that he is a very tough opponent. I also know he is from American freestyle wrestling. I have seen all of his fights. I don’t think he can surprise me with anything,” he said. The 27 year old says there us much more to his game than wrestling and suggests he will use his striking skills against Nakashima,

“Since my opponent is a wrestling lover too, I think I will have to use my striking skills as well. I can use my elbows, legs, and boxing as needed. I think my style is 50/50 and it depends on my opponent.”

He wants to challenge for the ONE Championship lightweight title and believes an impressive debut could put him in position to do just that. If he isn’t handed a shot at Ok Rae Yoon then the Russian would be very interested in a fight with Eddie Alvarez.

So Izagakhmaev wants to make a statement on his ONE Championship debut,

“I plan to finish him either standing or on the ground,” he said.

Fighters never announce that they plan to win by decision. But Izagakhmaev is from Dagestan and says he would not be sharing his plans if he wasn’t very confident of completing them,

“We’ll see. But where I’m from, if you say something, you have to prove your words at any cost.” 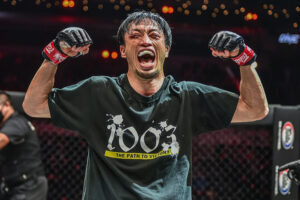