Shinya Aoki knows what it is like to lose to both Eddie Alvarez and Christian Lee. He is the only fighter in the world to have been beaten by both men.

So Aoki has a unique individual take on the current war of words between Alvarez and Lee. The former wants a shot at the champion while the latter has made it clear he is more interested in facing ranked opponents.

“Christian Lee is a champion, and he’s young and has a future. I don’t think Eddie Alvarez can say he wants to fight for the title from his side because he hasn’t won (recently).” 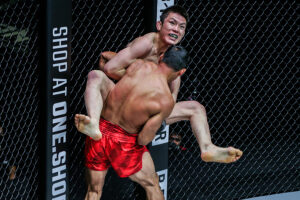 Aoki was on a seven fight winning streak when he was stopped by Alvarez in 2012. But the 38 year old has won his last four and has not tasted defeat since being stopped by Lee at ONE: ‘Enter the Dragon’ two years ago.

He’s ranked #2 in the division but feels he needs to take out another top contender in order to earn the opportunity to win the lightweight belt for the third time. Aoki feels that actions rather than words are needed if he wants to face Lee for the second time,

“In my opinion, I can say that I want to (fight for the title) considering my current state. If I say I want to fight for that, it’s not convincing enough but if I fight and beat opponents like Ok Rae Yoon, it will be convincing.” he said. Aoki has been on all sorts of winning streaks during his 18 year career so he is not getting too carried away after winning four in a row. His most recent result was a quickfire submission win of Eduard Folayang at ONE on TNT Part IV.

Aoki is no stranger to beating Folayang either, he has done it three times. So while he is entitled to be happy with his current form the veteran makes it clear he feels in no position to demand title shots,

“I’m not that shameless to say I want to fight for the title in my current state.”