Road FC returns next week. The Korean promotion has been on hiatus for the last eight months but is putting on an event in Daegu headlined by a featherweight title fight.

Newly crowned champion Hae Jin Park will be rematching Soo Chul Kim in the headliner Road FC 60 main event. This will be the promotion’s second card in a row to be headlined by this fight.

Park (9-1) was crowned champion after submitting Kim at Road FC 59 last September. He has been with the promotion since 2015.

Kim (16-6-1) fought on the inaugural Road FC card in 2010. He also fought on ONE Championship’s first ever event and won the bantamweight belt with both promotions.

The card will also feature a boxing match pitting two promotional veterans together. A Sol Kwon is the former Road FC lightweight champion but announced he was retiring from combat sport to become a missionary in Brazil.

He faces Yui Chul Nam who was also a former Road FC lightweight champion. But unlike Kwon he went on to bigger and better things, signing with the UFC and competing three times inside the octagon.

Kwon is 35 and has not fought since 2019, he was originally set to face Young Ho Seol at Road FC 60 but that bout was scrapped. Nam is 40 and has also been inactive for the past two years.

In the flyweight division undefeated Korean prospect Jung Hyun Lee (6-0) has been matched with Japanese journeyman Seigo Yamamoto (4-8-1). The latter has lost his last three while the former has not taking on any top opponents yet.

In a catchweight contest set for 161lbs hard hitting Mongolian Nandin-Erdene Munguntsooj (14-7) has been matched with Je Woo Yeo (4-1). The two first fought at Road FC 51 with the Korean getting stopped in the second round.

Two undefeated Korean bantamweight prospects will face off when Hyun Woo Kim (3-0) takes on Ji Yong Yang (3-0). The latter is also undefeated as an amateur with five wins from five fights.

Road FC is the longest running MMA promotion in South Korea. It has put on a series of events called ARC with slightly modified rules in recent years. 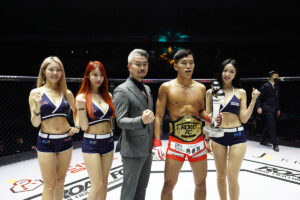