Soo Chul Kim fought on the inaugural ONE Championship card in 2011. Last year he came out of retirement to challenge Hae Jin Park for the Road FC featherweight belt.

Kim didn’t win that fight but was handed an immediate rematch at Road FC 60 last weekend. This time the 30 year old claimed a decisive victory, stopping Park early in the second round.

Kim found an immediate home for his low right kick and left body kick, landing both repeatedly in the early exchanges. A short jab sent the champion stumbling backwards and they clinched up after he got back to his feet. 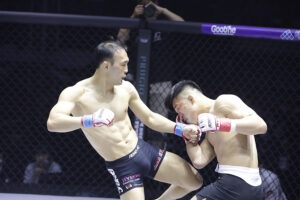 A stalemate ensued but Park found himself on the receiving end of more body kicks as soon as they separated. They returned to the clinch moments later with the champion dropping for a leg lock.

Kim slipped out easily and started attacking relentlessly with ground and pound from top position. Park tried for a leg lock again and was able to use the position to get back to his feet.

This time Kim elected to switch strategy and shot for a double leg. Park was briefly in his back back used the cage to stand up and was able to score with some punches before eating a big low kick that did visible damage. 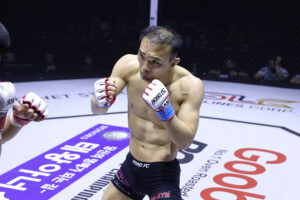 It was an action packed opening round and fans must have been wondering which fighter would be the first to suffer fatigue. We never got an answer to that question as Kim staggered Park with a left head kick right at the start of the second stanza.

Park never recovered and Kim swarmed all over him, with the referee calling off the contest just nine seconds into the round. The newly crowned champion moves up to 17-6-1 after registering his first win since 2017 while the former champion drops to 9-2

Former Road FC lightweight champions Yui Chul Nam and A Sol Kwon faced off in a boxing match. The latter retired from MMA in order to become a missionary in Brazil.

Neither man had fought since 2019, with Nam returning to Road FC after his UFC stint. He was the winner here, being awarded the decision after three rounds.