Stamp Fairtex has her sights set on Itsuki Hirata

Stamp Fairtex‘s last fight ended in highly unusual fashion. She tapped out with seven seconds remaining in round three as her opponent attempted to apply a guillotine choke.

There was confusion in the aftermath with Stamp somehow under the impression she had won. As a result she has been handed an immediate rematch with Alyona Rassohyna and the 23 year old is hoping for a better result this time around,

“The only thing in my mind is to win this fight because last time I didn’t feel like I lost. I plan to knock her out. I cannot tell you exactly how the fight will be but I want to knock her out or win by decision, as long as I win.” Stamp admits she might have underestimated the Ukrainian who was making her ONE Championship debut,

“The biggest thing that I learned from my last fight was that I cannot underestimate my opponent. I didn’t feel like I lost but I need to make sure Alyona has no chance to win in the rematch.”

To her credit Stamp survived several armbar attempts in the first fight, Rassohyna’s trademark submission. She will be preparing in the same fashion for the rematch,

“I was thinking about preparing for her armbar because everyone knows her strength is her armbar so I am trying to prepare for that and I want to improve on everything from my last fight, particularly the ground game.” Fairtex is synonymous with Muay Thai but Stamp has been working regularly with a BJJ black belt at the camp in Pattaya,

“I train very hard in BJJ, every night in Fairtex with DJ Jackson. He knows where my strengths and weaknesses are and helps me to work on my weaknesses.”

While she did well to avoid being submitted in the first fight it does not sound like Stamp was entirely happy with her performance. Having previously held and defended the ONE Championship atomweight kickboxing and Muay Thai titles she will now focus exclusively on MMA.

Stamp was attempting to compete in all three sports simultaneously and in hindsight she feels this might have been too much,

“I would like to focus on MMA this year. Last year I switched between Muay Thai and kickboxing and MMA and it was a lot for me, this year my goal is to compete in MMA and become a champion.” The winner of the quarter final bout between Seo Hee Ham and Denice Zamboanga awaits in the semi final, should Stamp prevail in her rematch with Rassohyna. She is friends with the Filipina and they trained together at Fairtex but could end up fighting one another in the second round.

Stamp confirmed that she would have no issue with being matched against Zamboanga,

“If I have the opportunity to fight her I will even though she is my friend. We are professional fighters but we will always be friends.”

However it is not Zamboanga or Ham who Stamp really wants to face. She has her sights set on a Grand Prix final against Itsuki Hirata,

“I don’t mind if I face Denice Zaomboanga or Seo Heo Ham but I really want to fight Hirata in the final. (She) is the strongest fighter in this Grand Prix. She is strong everywhere, she is good at striking, wrestling and BJJ.”

First and foremost she is proud to be representing Thailand in the tournament,

“I am honoured to be part of the Grand Prix and to be the only Thai fighter in the tournament.  I won’t let anyone down.” 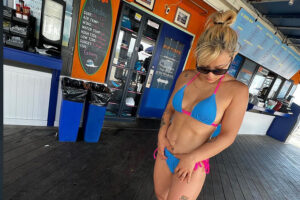