Takeru has the biggest fight of his life coming up in June. The K-1 star will face off against Tenshin Nasukawa in the most eagerly anticipated kickboxing match of the year.

In order to prepare for that contest he has enlisted the help of one of the world’s best boxers. Takeru shared a photo on Twitter of him training alongside Naoya Inoue:

Inoue is an undefeated boxing world champion. He has been in 14 world title fights and has won every single one of them.

While Takeru does have some losses on his record he remains one of the best kickboxers on the planet. But none of them are recent and he has won a K-1 Grand Prix on three separate occasions and held K-1 titles in three different weight classes.

Tenshin is the bigger name having fought for Rizin multiple times including a boxing match with Floyd Mayweather. But Takeru will be looking to prove he is the better kickboxer and he has got one of the best boxers on the planet to help out. 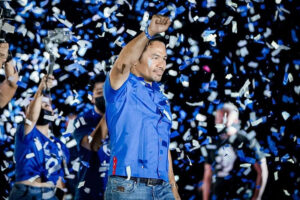