It may not have been the most emphatic performance of his career, but Tatsumitsu Wada’s split decision win over Daichi Takenaka was deemed worthy enough to earn him the ‘Sexyama’ bonus yesterday in Tokyo.

The fight headlined Road to ONE: ‘Sexyama edition’ in Shibuya. Wada secured a 300,000 yen ($2,700 USD) cheque in addition to his fight purse which was presented by the UFC veteran.

Yoshihiro Akiyama himself presided over proceedings and took up a role in the commentary booth, deciding which fighter warranted his giant ‘sexy’ cheque.. Wada was the one who stepped up even if he only managed to win his fight by a narrow margin. 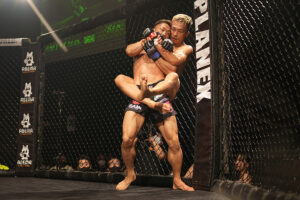 The contest got off to a lively start as Wada landed a leg kick. In turn, Takenaka cracked former Deep champion with a neat left cross and targeted Wada’s lead leg with an inside kick.

Wada, who’s been in with the likes of Demetrious Johnson and Kai Kara-France, then landed a left hook and an uppercut in the clinch before uncorking with a slick body-head-body combination. The 32-year-old then threw a lovely naked right cross and showed slick footwork to evade the counter.

Takenaka responded with a body kick and Wada scored with a single leg late on in the round but the former quickly found his feet. Wada charged forward to land the right straight at the start of the second stanza but ate a counter right hook for his trouble. He clapped back quickly as both men exchanged low kicks.

Takenaka saw a stout head kick blocked and followed up with more leg kicks. Wada reacted by shooting for a single leg but only managed to floor Takenaka briefly.

The Shooto veteran dished out some solid knees in the clinch, only for Wada to plant a powerful right hook his chin. Takanaka then let go with an uppercut with the left hand. 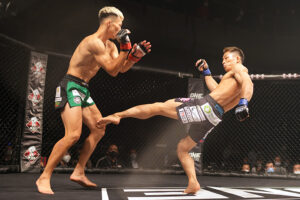 Wada was able to take his opponent’s back and wrestled him to the canvas. He found himself on the bottom but landed a sharp elbow before transitioning back to the back as he sought to lock up the body triangle.

Takenaka did well to work his way into top position and landed with some ground and pound at the end of the round. Both fighters let fly at the start of the third as Wada went in for another single leg.

Takenaka defended well but Wada pressured his opponent against the fence and eventually swept him to the floor. After landing body shots in the clinch he was able to take Takenaka’s back once more. The 31-year-old did well to stave off the choke attempt and twisted his body into Wada’s guard. Takenaka held the position and landed shots for the remainder of the fight but with Wada staying active from bottom he’d done enough to secure the win.

It was an engaging contest and one that merited a fun-sized check for Wada as his record climbs to 23-11-2. Takenaka falls to 13-3-1. Elsewhere, Shinya Aoki fought Shutaro Debana to a draw in a grappling contest. Time ran out before either man  could sink in a submission.