Tatsuya Saika has had to wait a while to fight Genpei Hayashi. The fight has been booked for three different Pancrase cards and looks set to finally take place on Sunday.

Saika will be hoping third time is the charm and that his Pancrase 318 title tilt goes ahead without a hitch. He hasn’t fought in a year and is anxious to get back inside the Pancrase cage,

“Honestly, I feel partly anxious with the year gap, but my training in that time has been solid and I feel much stronger. I’m sure I can show everyone how my level has improved.” 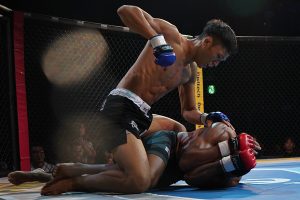 He admits that seeing several fights postponed or cancelled has taken a mental strain,

“Yes, psychologically I’ve felt uneasy at times but with the coronavirus situation it can’t be helped. I knew the only way was to get on with training, get stronger, and know in my heart the day would come.”

At least Saika has been able to make use of the time off,

“I’ve put a lot of work into my strength and conditioning. I’ve also strengthened my grappling and takedown defense.” 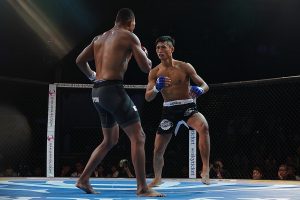 Saika earned his shot at the belt with two first round finishes. He stopped Yutaka Kobayashi at Pancrase 307 and Tom Santos at Pancrase 308 and says 2019 was a turning point in his career,

“Both have big names. They both fought in title matches or in Rizin. They’re both fighters I’d seen a lot of, and I realized the time had come for me to face big names. It was scary at first, but I trained hard and was able to get those wins.”

The fight is scheduled for five rounds. Saika has never even seen the second round and admits he finds the prospect of potentially fighting for 25 minutes intimidating,

“Until now I’ve finished all my fights in round one. I feel some pressure about how I might feel going into a second round, but I think I’ll be focused and fine when I fight.” 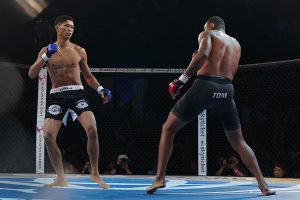 The 30 year old has made a career out of knocking people out. Saika says this will always be the game plan,

“I’m a striker. It’s MMA, but my style is striking, so I’m going in with that. I want to just how destructive my punches can be, my KO punch.”

Saika expects his opponent to adopt a similar strategy,

”Trading punches is risky. We both have the power to knock each other out, so one of us is going down.”

For this reason he feels the fight has the potential to produce some fiery exchanges,

“It’s going to be fireworks, fisticuffs! I do feel it would be good to show more grappling and other skill areas, but after all I think we both want to excite the fans with our striking.”

Genpei Hayashi says Pancrase postponements have been a positive for him