Daichi Kitakata may have fallen short in his first try to become the Strawweight King Of Pancrase nearly three years ago, but he made sure that the outcome would be in his favor in his second chance at championship glory.

A solid all-around performance steered the 28-year-old native of Osaka, Japan to an impressive fifth-round stoppage of Mitsuhisa Sunabe in the main event of Pancrase 307, which took place at Studio Coast in Tokyo, Japan on Sunday, July 21st.

Kitakata played to his strengths throughout the title tilt, torching his opponent with his cracking strikes while efficiently exhibiting his ability to take matters to the canvas with his high-impact takedowns. In the closing moments of the opening round, it appeared that Kitakata was on his way to secure an early finish by knocking Sunabe down with a powerful volley of punches that was punctuated by a solid left hook.

Although Sunabe found his rhythm in the second frame and hurt Kitakata with a lashing kick to the ribcage, the latter regained his momentum in the third stanza, where he had his opponent reeling with another left hook and a jumping knee.

Kitakata tried to finish things off in the fourth, where he caught Sunabe with his signature guillotine choke. However, his foe was able to hang on and survived to the next round.

Despite being ahead on the three judges’ scorecards, Kitakata boldly pushed to end it right there and then, clipping Sunabe with a counter right cross and then forcing the referee to call a halt to the contest with a series of hard elbows. The official time of stoppage was 0:38 of the fifth and final round. 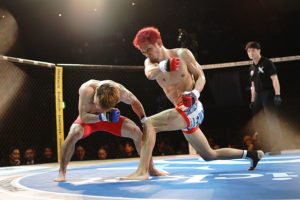 Kitakata improves his professional record to 20-8-1 and has now won five-straight matches since bowing to Sunabe in their first encounter at Pancrase 283 in December 2016.

In his post-fight interview, the newly-minted Strawweight King Of Pancrase called out his champion counterpart from the Shooto promotion for a bout at ONE: ‘Century’, which is set for Tokyo on October 13. The event will feature four Shooto vs. Pancrase matches with $50,000 USD on the line for each winner.

On the other hand, Sunabe drops his MMA standing to 29-8-4 and now suffers from a two-match losing skid. The defeat also snaps his almost eight-year undefeated streak in Pancrase. 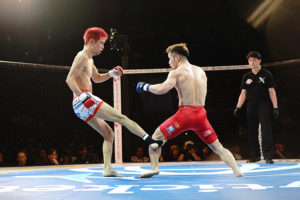 Rafael Silva (31-6) of Brazil had to dig deep in order to extend his reign as the Bantamweight King Of Pancrase, putting an indomitable Yuto Hokamura (12-8-2) into sleep with a tight arm-triangle choke in the second round of their co-main event clash.

In a battle for the interim Pancrase flyweight championship, Shohei Masumizu (11-3) had his hand raised in thrilling fashion, defeating Masatatsu Ueda (16-4-2) by way of second-round technical knockout.