History was made on Friday night. Smilla Sundell became the youngest fighter to ever win a ONE Championship title, defeating Jackie Buntan in their strawweight Muay Thai contest.

Sundell is just 17 years old. The Swedish teenager picked up a $50,000 USD performance bonus for beating Buntan and says she is going to use the money to buy some cereal for her younger sister,

“I was so happy. I don’t know what to say. Thank you Chatri. I’m going to buy my sister some cereal. Lucky Charms! Because they don’t seem to have it in Sweden!” She should be able to buy quite a lot of cereal with that money. The Pattaya-based star trains alongside former atomweight kickboxing and Muay Thai champion Stamp Fairtex and received some words of inspiration from her,

“She said, bring this belt back home and do your thing,” Sundell said.

Standing at 173cms she is one of the tallest fighters in the division has a burgeoning reputation in the sport with 33 professional victories. She’s often struggled to find opponents on the Thai circuit and was once forced to compete against a male fighter when her opponent dropped out at the last minute.

Sundell feels that going the distance with an experienced opponent like Buntan was a valuable learning experience,

The precocious Swedish star seems to possess a surprising level of self awareness for someone of her age. Perhaps it is just modesty but afterwards she admitted that,

“Her movement (was good.) She’s fast. I think I put into action what I’ve been training for. I’m not a very smart fighter, to be honest!” 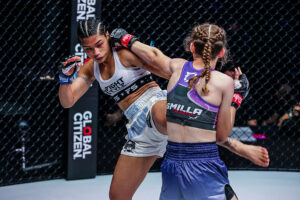 At the end of the fight Buntan’s face bore the brunt of the damage which Sundell had done. There was no doubt who the judges would declare the winner and the teenager thinks she finished the fight stronger despite a slow start,

“I started off slow because I felt like I wasn’t warm enough. In the third round I (was) better I think.”