Thai MMA prospect Suwanan Boonsorn gets the opportunity to make her mark on the international scene on March 9th. The 22 year old faces Japanese fighter Emi Sato on the Deep-Jewels 23 show in Tokyo.

Like many MMA fighters from Thailand she comes originally from a Muay Thai background. Boonsorn, better known by the nickname Amp, started the sport at around 12 years old and went on to win both the WMC and WPMF 100 lbs world titles.

Fighting under the name Pizza Sor Thipjaroen, Amp amassed an impressive 74-4 record. She was so good that she simply ran out of suitable opponents in Muay Thai which inspired her to explore other martial arts.

She made her pro debut in 2014 but by this stage Amp was already making a name for herself in the grappling world. She represented Thailand in numerous competitions and tournaments travelling to Japan, Sweden, Columbia, Indonesia and several other countries to compete in Jiu Jitsu. 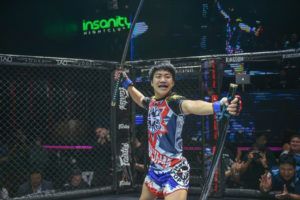 Female MMA is relatively niche in Thailand and it can be difficult to get recognition, but Amp became an overnight sensation after beating Loma Lookboonmee by first round armbar submission at Full Metal Dojo 16 last November. Her opponent has already fought for Invicta and Pancrase as well as being a big name from the world of Muay Thai.

According to Amp the matchup between her and Loma had been several years in the making, and was on the table well before either fighter had even considered MMA,

“I was matched up several times to fight Loma back when I was younger and fighting Muay Thai but for various reasons it never happened, each time one of us would get sick or injured and have to pull out.”

Having been away from the sport of Muay Thai for several years Amp knew that her opponent would be the superior striker. But she felt confident her submission skills would make the difference,

“When offered the fight I felt there was some pressure on me, I would have had to turn the fight down then if it was under Muay Thai rules as I had already been away from the sport for over four years and don’t think I would have been able to beat her.”

Amp has been spending time at Phuket Top Team and the coaches came up with the perfect gameplan for her to beat Loma,

“But I felt with my background in Ju Jitsu and BJJ that I had a strong chance of beating her, so we planned to take the fight to the floor as soon as possible. I knew I had to take the opportunity when offered the fight. I didn’t just want to show everyone what I could do, I also wanted to really test myself.” 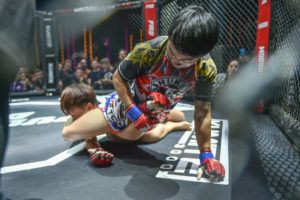 Her reward is a trip to Tokyo but once again the 22 year old has been matched with an intimidating opponent.  Sato is riding a four fight winning streak and this time Amp thinks her striking skills will come to the fore,

“I don’t get too much time to watch other fighters as I am very busy competing or training but I have seen some of her fights online. She is decent on the ground but not so strong standing. I will try to keep this fight standing up and use more of my Muay Thai skills, but I am not worried about fighting her on the ground either.”

As for her future goals Amp is already dreaming big and wants to follow in the footsteps of her MMA idols, who come with very contrasting personalities.

“My dream is to make it to the very top professionally in MMA and fight on the biggest promotions there are such as ONE Championship or UFC, I really want to be one of the best fighters in the sport.

“The fighters in MMA I really look up to are Conor McGregor because I love the confidence and self belief he brings when he fights and Thug Rose (Rose Namajunas), what I like about her is she has a quiet manner outside of the ring, she looks very timid and it’s almost hard to believe she is a fighter but when she gets in the cage it changes instantly and she is a fierce warrior.”

Amp admits that the switch from being a Muay Thai fighter to MMA wasn’t easy at first, but a strong routine soon saw her adjust.

“I have always loved sport and been competitive, I loved Muay Thai and soon fell in love with Jiu Jitsu. It wasn’t easy at first to change styles, but I train six times a week, focussing on a different discipline each day such as Jiu Jitsu, No-Gi, Muay Thai, kickboxing and MMA specific training.” 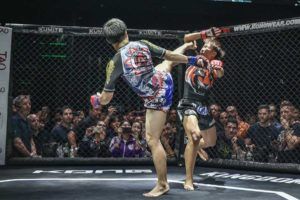 Amp also believes there are a lot of opportunities for top Muay Thai fighters to make the switch over to MMA and hopes to see the sport grow more in her homeland,

“Muay Thai fighters can definitely make the cross over to MMA, but they have to understand how important it is to work on their ground game and defences. MMA is still very small, it’s a growing sport in Thailand but I think a lot of people are scared and get put off by what they see is the brutality of it.”

ONE Championship has a card booked at the Impact Arena on Saturday and Thailand is home to world renowned camps like Tiger Muay Thai and AKA Thailand. As Amp prepares to fight in Japan for the first time she hopes more of her compatriots will start to discover MMA, 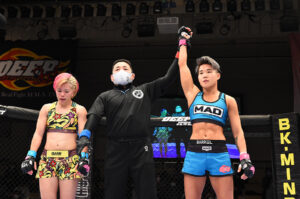