Thai fighters put through their paces ahead of ONE: ‘Dreams of Gold’

As anticipation builds towards the final of the Featherweight Kickboxing Grand Prix the stage is set for  the semi-final bouts to take place in Bangkok next month.

Both bouts are set for ONE: ‘Dreams Of Gold’ which takes place at the Impact Arena on August 16th. The show features a stacked card of fights, headlined by Petchdam Petchyindeeacademy who makes the first defense of his flyweight kickboxing title title against accomplished Dutch fighter Ilias Ennahachi.

An open workout to check on the readiness of the Thai athletes was held at the Golden Tulip hotel in Bangkok on July 25th and saw a large crowd attend as each fighter were put through their paces on the pads.

Bangpleenoi Petchyindeeacademy was the first to showcase his skills as he faces a tough battle against England’s rising star Liam Nolan. Bangpleenoi made his ONE debut with a win against Brown Pinas on the ONE: ‘Hero’s Ascent’ event in Manila, but acknowledged it will be a different stage fighting in front of his hometown crowd.

“I have fought a lot in the main stadiums in Thailand before, which gave me a good name in Thailand, but ONE gives me the opportunity to become famous around the world. There will be a little more pressure on me this time though as I am fighting in front of my countrymen. I am about 70% ready now, but will be 100% ready by the time of the fight and I am determined to get the win for Thailand.” 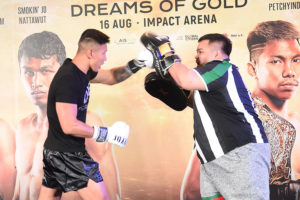 Lerdsila Champairtour is the veteran performer on the show and also faces a strong opponent in Michael Savvas of Cyprus who is currently tearing up a storm in Thailand’s main stadiums and had a strong win in his ONE debut against Thai veteran star Singtongnoi Por Telakun.

Lerdsila is known for a slick elusive style that earned him the nickname ‘Eel on a Skate’ from the Thai press back when he was a regular in Thailand’s main stadiums and will be the most technical fighter Savvas has fought to date.

The Thai veteran acknowledges that he will have to be at his slippery best against the young warrior from Cyprus,

“I try not to trade to much when I fight and use skill more. I am not getting any younger so need to not take too many risks. I don’t know if I can avenge Singtongnoi’s lost as my opponent is tall and big and young and on a strong run of wins. I will try my very best, as whenever you fight you have to be sure you can win. It is a sport so there will always be a winner or loser but I will try my very best to be the winner,” he said. 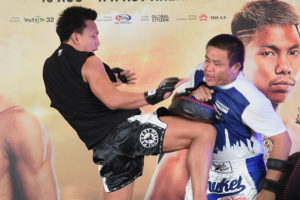 Muangthai PKSaenchaigym is also ready to bring his own brand of ferocity and mayhem as he faces Japanese warrior Kenta Yamada in a bantamweight match up,

“I am in the best shape of my life and I am determined to get the win. I really want the opportunity to fight for the ONE title and I always tell myself when I fight, I must put on a strong entertaining fight for the fans, as I believe this will help me reach my dream,” Muangthai said. 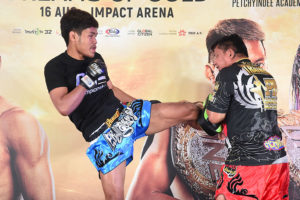 Thailand’s double discipline ONE champion, Stamp Fairtex has her eyes on a third title as she looks to add to her kickboxing and Muay Thai belts. She has a tough task ahead of her against Indian Asha Roka in what will be just her second fight in the sport of MMA,

“This will be my second MMA fight, but there is a lot more at stake now, against a lot stronger opponent. Asha is very dangerous with her hands and also fights in professional boxing so we have been working a lot on defending and avoiding punches and I will look to use my Muay Thai techniques to get the win.”

“This won’t be for the title yet, I am just looking to get experience and work my way into the rankings but I hope everyone in Thailand will get behind me and help me get the win.” she said. 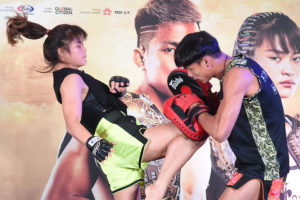 Although not the show’s main event the eyes of the world will be on the Grand Prix Semi-final match between Jo Nattawut of Thailand and Giorgio Petrosyan. $1 million USD is on the line for the tournament winner and the Thai has been training hard,

“If you ask about nerves before the fight, I don’t really have any anymore. I have already fought for ONE and have had many other fights so I don’t really feel them much now. I lost to Petrosyan before, but my preparation the last time could have been a lot better and I flew in from America at the last minute.”

Nattawut expects to put in a much improved performance second time around,

“This time I have trained a lot harder, I have done a lot of hard work in America and come to Thailand three weeks ahead of the fight. We have a strong fight plan that we have worked on this time too. I want all the Thai people to get behind me and help me make a name for Thailand in this fight.” 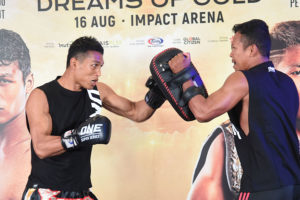 The headline bout of the night sees Petchdam Petchyindeeacademy make the first defense of his ONE flyweight kickboxing title against six times world champion Ilias Ennahachi of the Netherlands and Petchdam knows he faces a strong challenge against a fighter with more experience under the kickboxing ruleset,

“It is a very important fight for me as It is not only my first defense, but also here in Thailand. I want to win and keep the belt here in Thailand. Winning the title has helped my fan club grow not just in Thailand, but around the World. I have been training hard for a month already and will be 100% ready. I have I think in the amount of fights I have had and also the power in my left kicks. I will be using it even more in this fight as I will try to over power him.”

He also had a message for his Dutch opponent,

“Elias train as hard as you can, as I am here, ready and waiting for you!”