The fight is set for July 9th and has already made headlines in Thailand. Non Natt is a major star who has 1.3 million Instagram followers, several of which are famous Muay Thai fighters.

She frequently shares photos and videos of herself working out although there is no footage of Nong Natt training Muay Thai:

In 2004 she was arrested after authorities discovered she had starred in several explicit films which were being distributed globally. Nong Natt was fined but the incident received mainstream publicity which helped to make her a huge star in Thailand.

In 2012 she made more headlines after marrying an American millionaire who was nearly twice her age. The marriage didn’t work out and they were divorced five years later.

Her opponent does not appear to share Nong Nat’s high profile. Ammy Maxim does not currently seem to have an Instagram account but has 110,000 followers on Facebook where she shares photos of herself working as a ‘pretty’ at motor shows.

It has been tough times for the Muay Thai industry in Thailand. The country’s first ever Covid-19 cluster started at an event at Lumpinee Stadium which went ahead despite a ban on public gatherings.

With the tourism industry hit hard by travel restrictions and people avoiding crowded places promoters have struggled to fill stadiums in the way they used to prior to the pandemic. This has caused some imaginative types in the industry to start thinking outside of the box.

As a result we have seen Lumpinee Stadium start hosting MMA fights for the first time in its history. Kru Dam, who has his own Muay Thai show on Sukhumvit, appears to have decided to try something a little bit different. 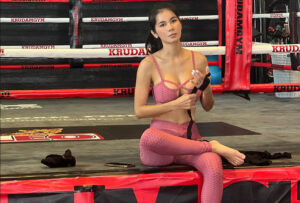