ONE Championship fans probably won’t be familiar with the name Thomas Narmo. But ice hockey fans might be, the Norwegian was a full time professional who dreamed of representing his country in the Olympics.

These days Narmo competes in the cage instead of on the ice. But it was an unscheduled and unwelcome change of career for the  27 year old who was forced to give up on his ice hockey dreams, 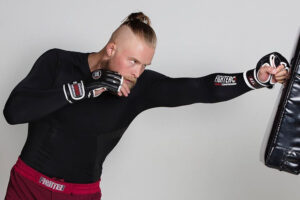 He was a goalkeeper for the Pelicans team in Finland and had been linked with the NHL but Narmo’s ice hockey career was abruptly ended by a back injury,

“The doctor said it was probably going to take up to two years to fully recover and be able to play. And even if I recovered, if something like this happened again, I might end up in a wheelchair,” he recalls.

Narmo’s world fell apart and he was left to face a future without the sport that he had been learning obsessively for the past decade,

“I felt too young to take that risk, so I figured that I would just do the rehab training and move on with my life. It was a really dark moment of my life. I had to find myself again. I’d lost something I put thousands of hours of time and effort into. Suddenly, everything was gone. It was quite depressing for a while.” 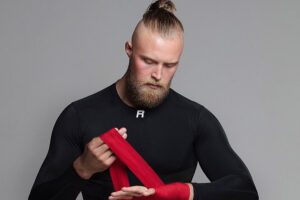 A physiotherapist suggested he try submission wrestling as part of his rehabilitation and Narmo ended up doing more than just trying it,

“I ended up doing Muay Thai, but I didn’t know really because I didn’t do any research on what it was. I thought it was fun, so I just continued the session. After the class, I found out that it wasn’t submission wrestling. Then I tried that too, and I just got hooked.”

For Narmo martial arts suddenly filled the void that ice hockey had left in his life,

“At first, I didn’t feel like I was done with hockey. I felt like I had so much more to accomplish. I wanted to play in the Olympics, but it didn’t happen. And sometimes, that’s life. You just need to find something else that gives your life meaning, and for me, that was martial arts.” Narmo will never forget the exhilaration he felt when he stepped into the ring for the first time,

“When I went into the ring for my first Muay Thai fight, it was a rush that I’d never experienced before.”

His upward trajectory has been steep. After mixed results as an amateur Narmo turned pro in 2019 and was able to win four fights out of four despite the global pandemic.

At ONE: ‘Battleground’ Part II he faces Alain Ngalani. The event is being broadcast this Friday and ‘The Last Viking’ admits he is surprises at the speed with which he has been able to secure a contract with one of the world’s top promotions,

“It’s happened quite fast. That class I stepped into was only four years ago this summer, so getting the opportunity to compete at ONE Championship is a true honor for me,” he said.

He will be the first Norwegian to ever compete in MMA on a ONE Championship card. It might seem like a surprising career path but it is one Narmo has been focusing on for a long time,

“I’m so excited about this. My dream has always been to compete in Asia and my goal was to get a fight in ONE.”

Ngalani is a hard hitting Cameroonian who has been on the ONE Championship roster since 2013. He is an intimidating opponent for anyone but Narmo is adamant he is ready to take the step up,

“Mentally, I’m super prepared for this. I feel like this is my moment, it’s my time.” 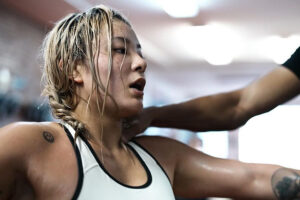