Lin Heqin scored a decision win over Bi Nguyen at ONE: ‘Bad Blood’. The Chinese atomweight jabbed her way to a comfortable victory and is already talking about fighting for the title in 2022,

Her loss to Ritu Phogat at ONE: ‘Battleground’ snapped an 11 fight winning streak for the Chinese fighter but after her return to winning ways last Friday she sounded extremely confident,

“I can fight anyone right now because I’m very confident after tonight. As for my big plan for the year? It’s the title shot. I want the belt so badly,” she said. 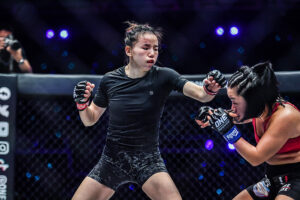 Angela Lee will be defending the title for the first time since the birth of her child at ONE: ‘X’. It is a fight the Chinese fighter would like,

“I want the belt so of course I want to fight Angela Lee because she’s had the belt for such a long time. I believe this is my time to win a belt.”

Lee is facing atomweight Grand Prix winner Stamp Fairtex at ONE: ‘X’ on March 26th. Lin would also like to test her skills against the Thai challenger,

“I want to fight Stamp Fairtex because she’s ranked #1 now so I want to challenge her. Everyone knows Stamp is so strong right now. She’s amazing in stand-up fighting and she’s so good on the ground so I have to say that if the fight happens it will go the distance and it will be a decision win (for me).” 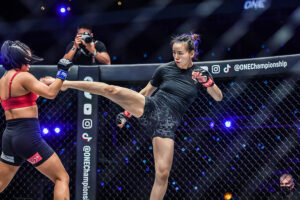 Lin doesn’t appear to be very confident in her ability to finish Stamp but at least she is honest. Another fighter that the 28 year old would be very keen to face is Tiffany Teo,

“For my next fight I would say that I want to fight Tiffany Teo more than Ritu because Teo beat Meng Bo last time, I’m so angry about that. So if I had the chance, I’d fight Tiffany,” she said.

Heqin actually fought Bo on her pro MMA debut back in 2015. They are clearly close these days but while the latter is #5 at atomweight the former is currently unranked.

It is a situation Heqin would like to urgently address. The Chinese fighter sounds open to fighting anyone and everyone in what promises to be a big year for the atomweight division.