Tiffany Teo made a successful start to life in the atomweight division at ONE 161. She towered over Ritu Phogat who looked intimidated right from the offset at the Singapore Indoor Stadium.

Teo landed some heavy low kicks in the opening exchanges although Phogat did score with a right hand. She landed a solid right kick to the midsection but the Indian was able to catch her next kick and immediately worked for a single leg takedown.

But the two time strawweight title challenger stuffed it with relative ease. Teo had her back against the cage as Phogat worked for the single leg but the Singaporean was able to defend.

Teo attempted to grab Phogat’s right arm and lock in a kimura and from there she was able to take the Indian’s back. With three minutes remaining in the round time was very much on the Singaporean’s side.

Teo had both hooks in but Phogat was able to consistently peel her arms away just as the submission looked deep. With two left in the round she secured a body triangle with both feet locked around the Indian’s midriff.

Phogat was able to roll over so that she was face down on the canvass but Teo still had her back and was able to land some knees to the head. She locked in the rear naked choke again and with eight seconds remaining in the round the Indian tapped.

This makes it back to back submission losses for Phogat who drops to 7-3. Teo moves up to 11-2 and continues her proud record of only ever having lost in strawweight title bouts.

For the Singaporean an atomweight title shot is potentially within reach. She seems to have no issues making weight and looks set to be a serious force in her new division. 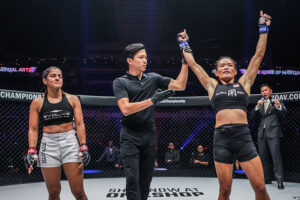 Oumar Kane (4-1) got back to winning ways with a second round stoppage win over Batradz Gazzaev (3-1). The Senegalese star mounted his opponent and rained down punches until the referee had no option but to step in and call off the contest.