Tiger Muay Thai attracts some of the best fighters from all over the world. It is inevitable that some of them will eventually end up facing each other and a huge matchup between two men who have trained at the gym is reportedly in the works.

In the past few days speculation has been rife that undefeated Swedish star Khamzat Chimaev could end up fighting Israel Adesanya.

Chimaev declared on Twitter that the fight would be,

“Easy money for me, zero wrestling. one round I’m gonna kill him.” 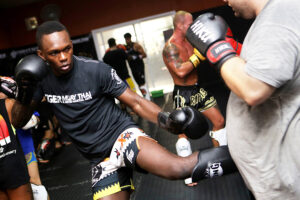 Unfortunately the Tweet has been removed as issuing death threats on social media is frowned upon. But Chimaev is clearly confident he would prevail in a fight against the current middleweight champion.

The Swedish fighter is undefeated and currently plying his trade in the welterweight division. The difference in weight would not be an insurmountable obstacle and several pundits have weighed in on the matchup.

Henry Cejudo, a former two division champion himself, seems to think that Adesanya would ‘die’ which somehow slipped past the Twitter censors:

Chimaev was also angered by Daniel Cormier’s suggestion that it would be an easy fight for Adesanya. He managed to avoid threatening the former fighter and pundit so this Tweet is still visible:

@dc_mma for you and your team, it may be a problem, but not for me. If you think he might be a problem for me let him try to stop me. Do you know why I am better than you?

Adesanya appears to have stayed away from the Twitter spat. But he did open up about the possibility of fighting Chimaev during a recent appearance on the MMA Hour,

Adesanya was dismissive about the possibility of Chimaev earning a middleweight title shot,

The reigning UFC 185lbs king was also dismissive about the idea of Chimaev being able to compete as a middleweight,

“He’s only fought like one middleweight fight that I’ve seen and I’m just like who’s he fought?” 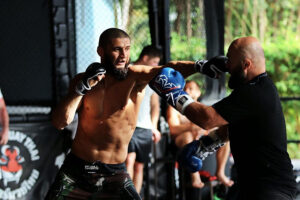 However he wasn’t totally dismissive about Chimaev’s chances of success at 185lbs,

Chimaev was at Tiger Muay Thai earlier this month while Adesanya spent a lot of time there when he was making the transition from kickboxing to MMA. The two men appear to be on a collision course and if the Swedish fighter can successfully navigate a move to middleweight it seems a matter of when, not if, this matchup happens.