Training for ONE: ‘Eternal Glory’ is a family affair for Bruno Pucci

For most fighters a family holiday would not be the right time for a training camp. But when you are married to an undefeated MMA champion whose brother is a top contender in your division things are slightly different.

That’s the situation Bruno Pucci found himself in when holidaying in Canada with wife Angela Lee and her family over Christmas. Her brother is also competing on the ONE: ‘Eternal Glory’ card next Saturday and the Brazilian says they managed to train together,

“Christian (Lee) and I are training partners, and he’s fighting on the same card. So when we went to Canada we found a gym nearby. We were training every day even though we were on holiday.” 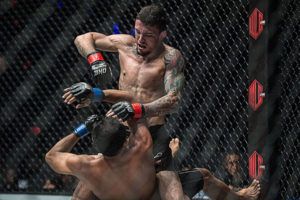 Not only are the two men competing in the same division, but Christian Lee has actually beaten the man Pucci will face on Saturday. He stopped Kotetsu Boku in 2017 and had some tips for his brother in law,

“Christian has been an excellent training partner. He has experienced Boku, so I think that will help me to develop a game plan for this bout,” Pucci said.

Boku was the inaugural ONE Championship lightweight champion and Pucci is excited to be testing himself against a former title holder with the promotion,

“I am very honoured to share the cage with him. He is a veteran of the sport, a former champion, and a real tough guy.” Pucci fought in Jakarta last month, making this a very fast turnaround. Since signing for ONE Championship in 2013 he has only been fighting sporadically but believes that will change now that he is fit, healthy and winning fights,

“In the past few years, I have had a lot of injuries, so I was forced to only fight once a year. This is a real quick turnaround, and I’m really happy with that. I want to keep busy with ONE Championship.”

He normally fights out of Evolve MMA in Singapore but after getting married Pucci decided to relocate to Hawaii. The island is renowned for producing mixed martial artists and the Brazilian believes the move will benefit his career,

“I’ve been in Hawaii with my wife, and I have developed a lot as a fighter. That was the whole point of moving here.” Pucci was touted as a top featherweight contender when he won his ONE Championship debut but his career has been derailed by three first round stoppage losses. He hasn’t registered back to back victories since 2013 but has an opportunity to do just that in Jakarta this Saturday.

Win or lose, Pucci’s fights are never dull. Six of his seven ONE Championship fights have ended in the opening round and the other didn’t make it past the second stanza.

He’s been a professional mixed martial artist for seven years and has yet to require the intervention of the judges. Opponents might know what to expect from the BJJ black belt, but Pucci doesn’t believe Boku will be able to prevent him from implementing his game plan,

“I’m willing to prove myself. Even though everybody knows I’m a grappler, they won’t be able to stop me.”