ONE on TNT next Wednesday (US time) will be broadcast live on prime time TV in the US. It will be a proud moment for Tyler McGuire who faces Raimond Magomedaliev on the show.

He is a serving member of the US Air Force and feels he is the perfect ambassador for his country and the promotion he fights for,

“As Americans, we’re proud of our military. I think I’m a good ambassador for America. I don’t talk trash and I’m always respectful of my opponent, and those are the values that ONE wants to reflect,” McGuire says.

McGuire’s fight is one of only six in the series that will be broadcast live and he sees it as an exciting opportunity,

“You can always watch the replays, but nothing replaces a live fight. To get that opportunity to fight in prime time, people are going to be tuning in.”

He is coming off a win over Agilan Thani at ONE: ‘Big Bang’ Part II and will be looking to make it back to back victories when he faces the Russian,

“It’s a big moment for me. Putting on a good performance is only going to help my stock.” He faces an opponent who has showcased some exciting striking skills during his ONE Championship career. Magomedaliev is particularly dangerous with spinning strikes and McGuire is well aware of the threat he poses,

“I think he’s an excellent, dynamic striker. If you look at what he likes to do, he actually kind of breaks the mold a little bit of the Dagestani production line. He’s more of a rangy striker.”

McGuire does not come from a wrestling background but takedowns have been key to all his ONE Championship victories. He thinks this could be the case next week,

“I’m not saying he can’t take me down because he’s a sambo champ, and I know he has that capability, but I’m not worried about him doing that. I don’t really have to fear the takedown like he does when I’m trying to get mine, as far as trading leather,” he says.

In fact he would welcome a takedown attempt from the Dagestani,

“If he does take me down, whatever, walk into my office, thanks. Now you’ve just saved me some energy. You took me down, and now we’re working.” 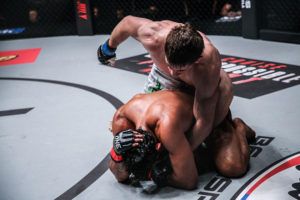 He has already challenged for the welterweight strap. McGuire was stopped by Zebaztian Kadestam late in the fifth round at ONE: ‘Warrior’s Dream’ in 2018.

It remains the only loss on his record and the low point of his career,

“That was probably the most adversity-filled fight that I’ve ever had leading up to it. It was rough. Because I was tired, I was a little disappointed with my performance,” the American says.

Fatigue was a major factor for the American in that fight,

“I don’t think people understand what that feels like when you would rather get punched in the face than raise your arms. But I still kept pressing and moving and I didn’t ever quit.” 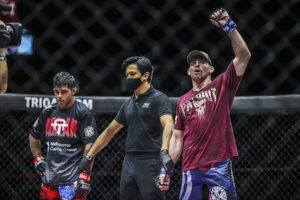 He still wants to win the belt and McGuire says that is the target,

“I feel like every fight should be a step forward in your career If it’s not, you’re taking backward steps, and maybe you should re-evaluate where you’re at. Should you still be doing this? If I’m not marching toward the title, then forget it.”

He won’t have to worry about fighting for more than 15 minutes next week. But McGuire doesn’t think he will need that long and plans to finish Magomedaliev in under two rounds,

“My goal is just to keep putting the pressure on and then I want to get that finish in the second round. It’s going to be head-hunting. I want to put him down.”