Tyler McGuire returned to winning ways at ONE: ‘Big Bang’ Part II with a decision victory over Agilan Thani at the Singapore Indoor Stadium. In a three round battle between former title contenders it was the American who came out on top.

Both fighters looked to assert themselves in the clinch early on but it was McGuire who secured the takedown. Thani sought to lock in a guillotine but McGuire found side control before the pair found their feet once more.

Despite the obvious strength of McGuire, Thani was able to scramble to his feet well, take McGuire down and transition from full mount to take the American’s back but he was battling against the clock and time ran out before he was able to fully capitalize on the position. 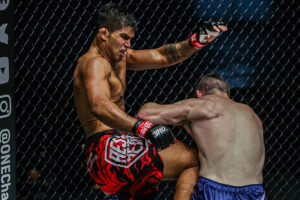 Thani showed astute control of centre circle in the second round and despite landing some solid jabs, the Malaysian was unable to inflict significant damage. And although Thani had produced some decent work it was actually McGuire who finished the round stronger.

McGuire continued to show his strength in the third with a neat uppercut on the clinch entry. The US military man continued to grind Thani down and demonstrated his power with another takedown.

McGuire took Thani’s back and looked to secure the win with a submission late on in what was a dominant overall performance as he got back in the win column and took his record to 12-1. Thani, meanwhile, slips to 10-5.

The card had begun with an emphatic finish from Rui Chen. The Chinese bantamweight looked razor sharp as he landed a series of potent right hands to the chin of Ali Motamed, sending the Iranian tumbling in the first round.

Rui, who had gotten back in the win column with a victory over Muhammad Aiman at ONE: ‘ Mark of Greatness’ back in June, finished the fight with several more right hands to take his record to 9-1.

In the featherweight division Jae Woong Kim stopped Tetsuya Yamada in the second round. He improves to 11-4 while the Japanese fighter drops to 26-8-2.