Curtis Blaydes and Francis Ngannou both came in comfortably under the heavyweight limit ahead of tomorrow night’s UFC Beijing card with the former weighing 260lbs and the latter 254lbs. The two men are set to headline the card at the Cadillac Arena in a rematch of a 2016 fight.

The co-main event also features heavyweight action with Alistair Overeem tipping the scales at 247lbs and UFC newcomer Sergey Pavlovich coming in heavier at 257lbs. 23 of the 24 fighters on the card made weight, Rashad Coulter came in 3lbs over the light heavyweight limit and will be fined 20 per cent of his purse.

This will be the UFC’s second card in mainland China following on from last year’s event in Shanghai. The promotion recently announced plans to open a state of the art performance centre in the country’s largest city and there are nine local fighters featuring on this card. 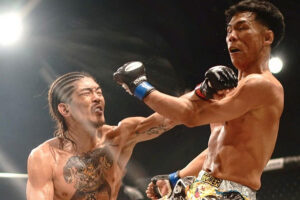