Vladimir Kuzmin wins 140lbs kickboxing tournament at Road to ONE 4

ONE Championship continued their search for global talent tonight, this time venturing to Ekaterinburg and partnering with Russian kickboxing promotion Fair Fight promotions to stage Road to ONE 4.

The highlight of the show was a four man tournament 140lbs tournament with a ONE Championship contract on the line for the winner. The first semi-final in the tournament featured local fighter Vladimir Kuzmin up against Maxim Petkevich.

Kuzmin looked the stronger of the two from the get go and the more composed. Petkevich moved around a lot at first, but seemed to be a little unsure of himself and Kuzmin moved well and picked off Petkevich with sharp counters. 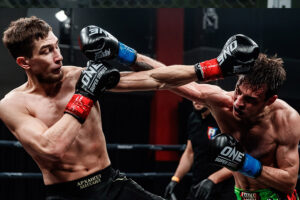 Petkevich started the second round stronger and looked positive, but halfway through the round he landed with a push kick, but seemed to catch his toes on Kuzmin’s block and immediately stopped to hold his foot in pain and the referee gave Petkevich an eight count.

Petkevich came back with some decent boxing, but Kuzmin looked comfortable, moving in and out of southpaw and orthodox and landing with sharp counters. The final round was a formality for Kuzmin as he controlled the ring well and landed throughout with hard punches and low kicks.

Petkevich managed to land one hard right hand, but it didn’t faze Kuzmin who took a clear points win at the end. The second semi-final saw Tamerlan Bashirov face Victor Mikhailov. Bashirov came out pushing forward behind a high guard. Mikhailov opened up with some hard punches early on, but Bashirov soaked them up on his gloves.

The action went back and forth between them, but Bashirov was the aggressor and looked like he was landing with the harder shots. Bashirov kept up the pressure in round two, looking a little wild at times and both fighters ended up clinching up.

Mikhailov landed a decent left hook mid round and shortly after Bashirov was warned for hitting on the break. The fight was a little wild at times and Mikhailov also picked up a warning for catching Bashirov with an elbow as he attempted a spinning back fist. Mikhailov unloaded with a big barrage of punches just before the bell.

Bashirov kept pushing forward at the start of the final round and opened up with some hard body kicks and knees. Mikhailov looked dangerous with his punches when he let them go and again finished the round strongly, with a barrage of hard shots, but at the end Bashirov took his place in the final with a split decision win. 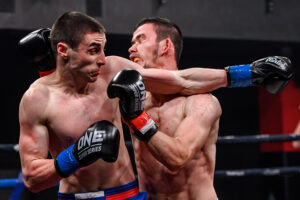 Bashirov landed with a strong, straight left, but looked a little reckless and kept walking onto sharp counters. Kuzmin landed with a strong uppercut and a sharp push kick to the face, but Bashirov’s aggression saw the fight stop and start often, as they both got entangled in the clinch.

Bashirov came out fired up in round two, landing with a solid body kick. Kuzmin kept moving and countering well. The referee started to warn both about too much clinching, but it tended to be a result of Bashirov’s aggressive, walk forward style. 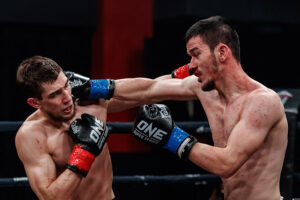 In the final round Bashirov came out landing with a hard body kick, but almost immediately after was told off by the referee after he locked his arms around Kuzmin’s waist and wrestled him to the canvas. 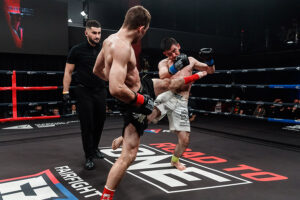 Bashirov kept pushing forward, opening up with sharp punches and low kicks, but Kuzmin fought well off the back foot, landing with crisp counter shots. There was some blood coming from the nose of Bashirov now and Kuzmin caught him with a push kick to the face and followed in with a hard punch combination.

Bashirov carried on with his at times wild attacks and Kuzmin carried on picking him off with fast counter shots. At the final bell Kuzmin picked up an unanimous decision win.

Kuzmin wins the Fair Fight 140lbs tournament and earns a ONE Championship contract in the process.

Road to ONE 4 reportedly set for Yekaterinburg on November 28th