Rukiya Anpo is the former K-1 super lightweight champion and a veteran of nearly 40 fights who has been in with some of the best kickboxers in Japan. Two self declared street fighters decided it would be a good idea to interrupt his training session and challenge him.

The results were predictable, yet hilarious. In a shocking turn of events it quickly emerged that the fighter with thousands of hours of training could handle himself a lot better than the untrained street fighters:

A couple of "street fighters" interrupted the sparring session between Rukiya Anpo & Kosei Yamada and challenged the former K-1 Super Lightweight Champion to a fight. pic.twitter.com/xpXdSu1pPg

Apparently the street fighters interrupted a serious sparring session between Anpo and Rise super lightweight champion Kosei Yamada. The latter was probably preparing for his upcoming fight against Jan Kaffa on August 21sth.

The decision for Yamada to train with Anpo would not have been taken lightly because the two men fought each other very recently. They went head to head on The Match, the kickboxing super card headlined by Tenshin Nasukawa and Takeru.

Anpo won by decision in front of 56,399 fans at the Tokyo Dome. He is at the pinnacle of the sport and looked understandably annoyed that several strangers decided to invade his gym and interrupt a serious training session.

Moral of the story

Anpo appears to take it easy on the second street fighter in the video. He lands some hard kick and knees to the mid section but throws punches with almost zero power as his opponent is totally unable to defend himself.

But the first street fighter seems to have done something to upset the K-1 star. He push kicks him hard in the face, drawing blood with a strike that would be frowned upon in most sparring sessions.

The moral of the story is that if you are sitting at home watching elite fighters on TV and thinking you can do better you are wrong, unless you happen to be an elite fighter yourself. The sooner you realize this better, because challenging skilled professionals to a sparring session will not end well. 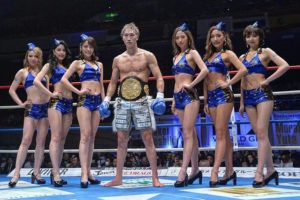