Being knocked out by Rose Namajunas doesn’t seem to have damaged Weili Zhang‘s confidence. The Chinese fighter has relocated to Arizona to prepare for the rematch and sounds like she has recovered mentally and physically from that UFC 261 defeat.

Zhang has been training with former two division UFC champion Henry Cejudo at Fight Ready and feels she has taken her game to a completely new level,

“I’ve been wanting to train with him for a while but the pandemic delayed out plans so I wasn’t able to train with him until now. I feel amazing training with him, he’s extremely knowledgeable about everything in MMA,” she told Helen Yee. 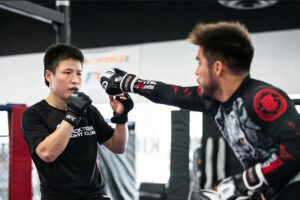 The 32 year old feels she is getting better every day under the watchful eye of the multiple time MMA and wrestling champion,

“I’m learning so many techniques and different details from him, it’s been unbelievable, he has exceeded my expectations. I’ve learned a lot of new things. Every day he’s teaching me so many new valuable things.”

She was shaken by the hostile crowd reaction at UFC 261 and admitted afterwards it has affected her performance. But Zhang says Cejudo has helped her with this side of the sport too,

“He’s taught me a lot not only technically but mentally as well. The most valuable lesson I learned from my last fight is focus. Being focused is so important, focus on yourself and don’t let anything outside distract you because you can’t control that you can only control yourself.” 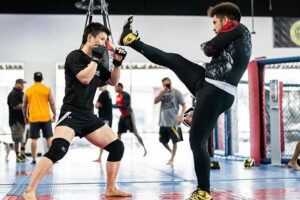 Having scored the knockout last time around you would think Namajunas has the advantage in terms of power at UFC 268. But Zhang doesn’t see things that way and feels this is one area where she will be superior when they meet for the second time at Madison Square Garden next month,

“I feel my strength and power is an advantage.”