Weili Zhang has opened up about her decision to prepare for UFC 275 in Phuket. The Chinese strawweight has done her full fight camp at the newly opened Bang Tao Muay Thai.

Speaking with UFC Countdown she admitted that confidentiality was a concern. It sounds like Zhang was concerned that if she trained at a busy camp information could get leaked to Joanna Jedrzejczyk and her team.

Zhang explained why she decided to train at Bang Tao Muay Thai which only opened its doors a few weeks ago,

“This is a new boxing gym, there are less people here. It allows us to do a better job of keeping out training confidential.”

While Bang Tao Muay Thai is new the team behind it doesn’t exactly lack experience. Frank and George Hickman both ran the MMA program at Tiger Muay Thai and are in big demand as coaches, flying all over the world to help the likes of Israel Adesanya prepare for fights.

Frank Hickman is currently in New Zealand to help Kai Kara-France prepare for his title shot at UFC 277. But Zhang says she has made some major improvements since relocating to Phuket at the end of April,

“I have been enhancing my speed and strength as well as my boxing skills. I’ve become more mature after that fight. I’ve gained a deeper understanding of this game.”

Zhang is coming off back to back losses but she sees the defeats to Rose Namajunas as a steep learning curve. The Chinese fighter seems to think that winning had made her complacent,

“Sometimes defeat teachers you more than victory,” she said.

Henry Cejudo famously described her as ‘Weili 2.0’ after helping her prepare for the rematch with Namajunas at UFC 268, which many felt Zang should have won. The 32 year old believes she has made even greater improvements in the five weeks she has spent in Phuket,

“Sometimes we lose a fight because of details, we’ve tried more techniques this time. I call it Weili 3.0.”

Interestingly Jędrzejczyk has not fought since the split decision loss to Zhang at UFC 248 in 2020. While the Chinese fighter has both her subsequent fights she feels the experiences have helped her ‘mature’ as a fighter,

“I’ve become more mature after that fight. I’ve gained a deeper understanding of this game.”

Two years ago today, one of the best fights in UFC history went down between Zhang Weili and Joanna Jedrzejczyk 👏 pic.twitter.com/0LRTBT5DXY

Carla Esparza recently won the strawweight title. This fight is being viewed by many as a title eliminator with the winner guaranteed a shot at the newly crowned champion.

While that hasn’t been officially confirmed the thought is definitely on Zhang’s mind. She wants to put on another ‘fight of the year’ at UFC 275 and thinks winning the rematch could earn her a title shot,

“In the second fight against Joanna we can fight like before, I believe I can beat Joanna I could return to a rank competing for the championship.” 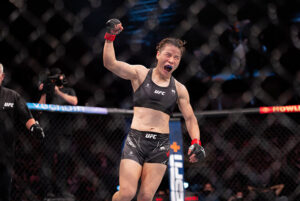