Wondergirl Fairtex will get to make her mark on the global scene at ONE: ‘No Surrender’ part III on Friday. She is a veteran of 51 fights and the current Thailand 118lbs champion.

Wondergirl faces tough Australian fighter Brooke Farrell in her ONE Super Series debut in Bangkok on Friday. She is familiar with her upcoming opponent,

“Brooke is very tough and has fought some strong opponents like Iman Barlow and Saosing Sor Sopit, she always comes forward and is very strong. For this fight I will need to use my boxing well, come in from behind the jab and make sure I land clean and hard. I know it will be a tough fight.” 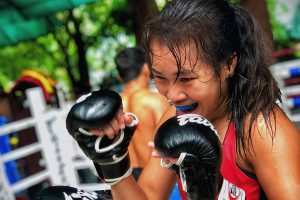 Wondergirl is moving up in weight for her ONE Championship debut and discusses the pros and cons,

“It will be a heavier weight for me even with the different protocols and hydration tests for ONE. I feel a lot stronger going up, but it feels like I have lost a little speed so will have to adjust to that.”

Having signed a six fight deal with ONE before the Covid-19 crisis, the fight has been a long time coming for Wondergirl. She is itching to go to work. With a wealth of talent in her division, she sees a few potential matchups,

“There was talk originally that I would get to fight Bernice Alldis of England, that would be a tough fight as she is very experienced and strong, then Covid came along and the fight was cancelled. I can’t wait to fight again as it has been a while now.”

There are a couple of other fighters on Wondergirl’s radar,

“I would love to fight Amber Kitchen or Viktoria Lipianska, I saw their fight on ONE: ‘Immortal Triumph’ in Vietnam and I am confident I can beat them both. Ultimately I want to win the world title and I want to face the number one at my weight, Iman Barlow, she is one of the best in the world and I want to get to that level.” 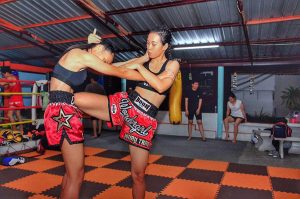 The Covid-19 situation has made it difficult for many fighters to adjust and stay in shape, but coming from a Muay Thai family made life easier for Wondergirl,

“My family have a gym in Bangkok called Jaroonsak Muay Thai. My father runs the gym and my sister Supergirl Jaroonsakmuaythai, also trains there and has just signed a contract to fight on ONE.”

Since lockdown ended Wondergirl has been training at the Fairtex Gym in Pattaya and says she is well prepared for her first ever ONE Championship fight this Friday,

“I was able to stay in shape back in Bangkok throughout the lockdown with the help of my father and sister. Once the lockdown ended everyone here at Fairtex helped to push me hard too, so I will be 100% ready to face Brooke.”