At Road FC 54 on Saturday night, after twelve years as a professional, Yang Hae-Jun finally became a champion by outlasting La In-Jae and pummeling him in the waning moments of the second frame.

The game plan was to march forward and throw hard strikes but La ended up tiring himself out in the process. He did have his moments in the first round, with excellent throws and trips but was never able to control Yang on the canvas.

Throughout the opening five minutes, La was eating punches at a tremendous rate and that proved to be his eventual downfall. HeÂ charged out the gate in the second stanza and landed a solid kick to the body but it was all downhill from there. Yang was consistently connecting while La pushed forward and tried to clinch. Once he was able to lock up Yang, La tried for a half-hearted throw and had his back taken.

La drained seemingly used up all his energy trying to get Yang off his back. Once he was flattened out, Yang used hip pressure to keep his foe nailed to the ground and dropped down a series of punches that provoked the ref to jump in and stop the action.

The 31-year-old Yang becomes the seventh middleweight champion for the organization and moves his record to 13-6 while La loses for the first time in his career and drops to 8-1-1. The co-main event was an evenly matched affair until the fighters entered the final round and that is where Kim Se-Young took over and put a heavy beating on Evgeniy Ryazanov.

Using a grappling-heavy attack, Kim was able to keep the Russian on his back for the majority of the round while throwing down strikes from top position consistently enough to score points. Ryazanov tried for submissions but the Korean easily slipped out, with both men covered in blood and sweat.

With about one minute left, Ryazanov was able to sweep Kim and land on top but he was so gassed that he could not posture to throw any punches to do any damage.

Kim (5-3) ultimately earned a decision victory and gets back in the win column after losing two in a row. Ryazanov (22-16), however, snaps his two-fight win streak and loses his second straight fight for the Korean promotion. 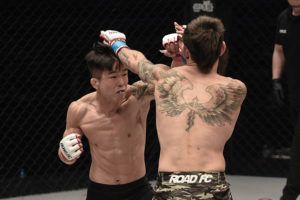 In the upset of the night, Choi Won-Jun inscribes himself into the Road FC record books by completely annihilating Hwang In-Su in five seconds.

After being away for a few years while nursing a shoulder injury, Hwang came rushing forward and was caught with a right counter that had his eyes going in all different directions. Once he collapsed to the ground, Choi finished him off with a couple of punches from top to silence the critics.

With that knockout victory, Choi (4-3) halts the hype train and propels himself into immediate title contention. Meanwhile Hwang (4-1) drops off the list of unbeaten contenders and shows the rest of the division that he is not invincible.