Yojiro Uchimura faces rising star Yoshinori Horie at Pancrase 312. The 35 year old knows he will be the underdog but is adamant he has what it takes to spoil his opponent’s homecoming.

Uchimura says that his experience inside the cage will play a pivotal role in offsetting Horie’s explosive style,

“My experience is my biggest advantage over him. I’ve fought the who’s who in Japan. To add, I’ve been doing this for over a decade now. He is young and talented, but I’ve seen and done it all,” he said through his translator.

Owning a professional record of 17-12-3, Uchimura shared the stage with several prominent names in the Japanese MMA circuit such as Nobutatsu Suzuki, Guy DeLumeau, Hiroshige Tanaka and Koyomi Matsushima.

Aside from MMA, he is also a prominent kickboxer in his own right. He was last seen inside the kickboxing ring when he competed in two high-profile matches at Rise 129 and Road to ONE: ‘Century’ respectively. 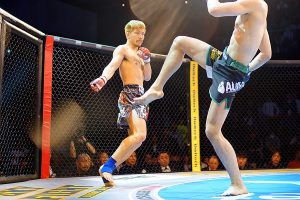 The Saitama native says he has paid his dues and feels that a fight with the young prodigy coming fresh off a UFC stint is his reward,

“This is not new to me. I’ve battled different types of fighters in the past, and I survived. It’s one of the reasons why I am still here. I respect him, and I see a lot of potential in him. But he is my opponent. I have to do my job. You will see the difference this Sunday,” Uchimura stated.

While Uchimura is confident you could not accuse him of complacency. He has left no stone unturned in preparation to face one of the top featherweights on the Pancrase roster,

“My preparation for this upcoming fight was great. I know I can fight at a high pace for this bout,” he shared.

“We have formulated a good game plan. If we can implement a good strategy, we will definitely walk away with the victory.” 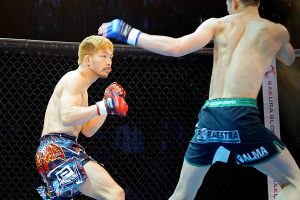 Uchimura’s crowd-pleasing approach has produced mixed results throughout his professional career. He has yet to win three fights in a row for Pancrase but says he is more focused on the outcome than the performance this Sunday,

“Fans can expect that the fight will be energetic. It will have a lot of action. But I am also here to win the fight. I want to win again,” he pointed out.

Uchimura has emerged triumphant in four of his last five fights.  At Pancrase 304 last year he scored a unanimous decision win over Shinsuke Kamei to earn his shot at Hori. Horie may be 11 years his junior but is in need of a win after a brief and forgettable stint in the UFC. He’s never lost back to back fights but Uchimura plans to change that,

“I’ve seen his past fight, and I think I know what to do against him. He wants to trade strikes with me, just like what he did in his last fight, be my guest. If I catch him, he’s only human, so he will go down,” he evaluated.

Uchimura values what he brings to the table versus Horie as he is fully convinced that he will have his hand raised in triumph.

“If I can execute my game plan the right way, I will get the job done. I am sure about that. I know what I am capable of. Like him, I am hungry to get the victory. I am going to take it at all costs.”