Yuki Ito booked his place in the semi-finals of the flyweight Grand Prix with a knockout victory over Byun Jae Un at Tokyo’s New Pier Hall. The Rizin veteran extended his winning streak to four in the Deep 110 headliner.

The Korean booked his spot in the quarter final with a submission win over Kazuki Shibuya at Deep 109. Ito secured his berth by a narrower margin earning a split decision victory over Kotetsu Hara on the same card.

Ito connected to the body and went upstairs with his left early on. Byun then shook his head after the southpaw threw an uppercut before responding with a left hook to the body. 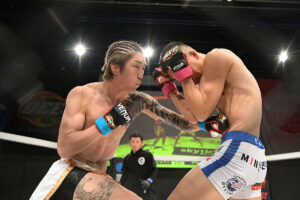 The Japanese fighter then had his opponent up against the cage before eating a right to the body and a low kick. Ito returned fire with a right hook before putting Ito on his backside with a follow-up punch.

Byun was able to grapple him into a body lock and take the fight to the ground. From there he landed shots from the top despite Ito firing off an elbow from guard.

Ito started to really let his hands go in the second round. The 25 year old cracked Byun with a right to the body followed by a left cross and another left straight. Ito continued to attack his opponent and caught him with a right hook before circling to fire off a right to the body. The onslaught had left Byun dripping with blood, and after getting checked out by the doctor the fight resumed.

Byun was able to get the fight to the ground again and took Ito’s back, only for the local favourite to get a reversal. When they returned to the centre the Japanese fighter let his hands fly once more and flattened Byun with the right to seal the seventh knockout win of his career. 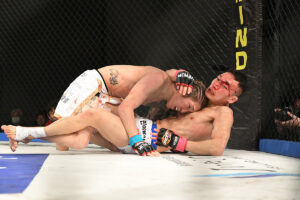 Yuto Uda (7-1-1) also booked his place in the last four having soccer kicked his way to glory against Yutaro Muramoto (10-7-1). Elsewhere Ryosuke Honda (10-2-1) scored the unanimous decision over Takahashi Matsuba (12-6-1).

Tatsuya Fukuda (18-7-1) took the other spot in the semis after getting the nod from the judges against Tomihiro Adaniya (17-7-3).