After an impressive win over Eduard Folayang on his ONE Championship debut Zhang Lipeng called out Shinya Aoki. His request wasn’t granted by the matchmakers and instead the Chinese fighter finds himself facing Ruslan Emilbek Uulu this Friday.

A win over the Kyrgyz fighter at ONE: ‘Only the Brave’ would probably be enough to earn Lipeng a spot in the top five and he knows exactly who he wants to fight next,

“I still want to call out Shinya Aoki until he accepts my challenge. I really want to fight against him because he is very high-level. I watched a lot of his matches. His wrestling and jiu-jitsu are very powerful, so I want to feel how strong he really is. I’ve also been training for over a decade, so I would like to battle with him.” 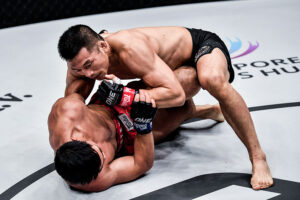 Aoki politely suggested that Lipeng might like to reconsider after the Chinese lightweight called him out. But the UFC veteran still wants to take on the Asian MMA veteran,

“I don’t think there is a need to reconsider. Actually, I want to fight against everyone, especially strong opponents. Maybe Shinya Aoki would feel humiliated if he accepted my challenge, since I just won one single match (for ONE Championship).”

Uulu is coming off an impressive win of his own. According to Lipeng the two men’s paths have already crossed in China,

“My first impression was that he had a lot of fights in China and seemed to be unbeaten so far. Plus, in fact, we both went to Xi’an Physical Education University for training, so we are fellow apprentices and yes, I’m impressed by him.” 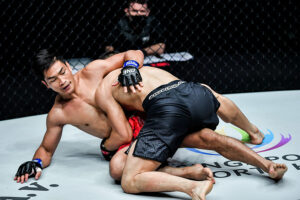 But having watched Uulu’s decision win over Pieter Buist he is confident he will have too much for him on the ground,

“Last time, he fought three full rounds, but I didn’t see a lot of techniques. He was just rushing forward, and I didn’t see any effective attacks after he took down his opponent. So he actually has no advantage in ground wrestling over me.”

He went the distance on his ONE Championship debut but would like a faster finish second time around,

“Like the last bout, I’m ready to fight three full rounds. But if I can control the game and give my best, I may be able to knock him out in the first or second round.” 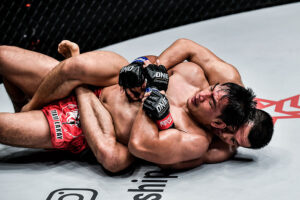 He was pleased to register a win over a former title holder on his ONE Championship debut. Lipeng hopes the victory over Folayang sent a message to the matchmakers,

“Of course, I was very happy to win my ONE debut against a former champ. The first bout is definitely very important, and it also shows my real skill level to ONE‘s boss.”

But the experienced lightweight knows that the hard work has only just started,

“The follow-up bouts are more important. I still have to keep winning because getting into the top-five and then finally winning the championship is what I plan for the future in my career.”