Shinya Aoki has been helping Yusuke Yachi to prepare for his lightweight title fight at Rizin 33. The veteran has been involved in more than his fair share of title fights over the years and is a seasoned grappler who has a similar style to the champion.

Aoki has been helping Yachi to work on his submission defence and gave some insight into his thoughts on Roberto de Souza. The former Dream and ONE Championship lightweight champion is much more experienced than the Brazilian and says this is a question mark which hangs over the reigning Rizin 155lbs king,

“Satoshi finishes his fights early so in my mind I am not so sure about his true abilities. If he’s fought through 15 minute wars or 25 minutes of grueling battle then I would know that he is the real deal but right now I don’t know how to evaluate him.” 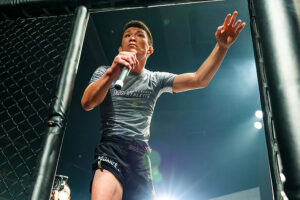 Souza’s only loss cam against Johnny Case at Rizin 19. Aoki thinks that the UFC veteran set a blueprint for beating the Brazilian,

“I’ve been saying from the beginning that if you frustrate him enough I think he’ll just give up.”

Yachi already has one loss to Souza on his record. He lasted less than two minutes when the two men first fought at Rizin 22 last year.

Aoki is convinced that if the tide starts to turn against Souza in a fight he will quit. With 57 MMA fights on his record the Japanese grapplers is one of the most experienced fighters in the division.

But he sees himself in Souza. Aoki thinks that they are both fighters who will give up once they realize that the match is not going their way,

“When you break it down it’s quite simple. Those who are described as ‘technical’ tend to give up during fights because they can predict what’s going to happen so they submit to their opponent before it happens. I’m kind of like that.”

It is a fascinating insight into Aoki’s mentality. Whether Yachi ahs what it takes to make Souza give up remains to be seen but he has enlisted the help of one of the most successful grapplers in the sport to prepare for his upcoming title rematch.