Adam Kayoom has been appointed head coach at Evolve MMA in Singapore. The Malaysian is a BJJ black belt who fought twice for ONE Championship before being forced to retire due to injury.

He will head up a team that includes numerous ONE Championship fighters including reigning champions Hiroki Akimoto and Nong-O Gaiyanghadao and contenders Amir Khan and Ritu Phogat:

Kayoom hails from Malaysia and was scheduled to fight for the inaugural ONE Championship welterweight title in 2013. But he was forced to pull out of that bout due to injury and has not competed since.

The 44 year old is based long term in Bangkok where he owns and operates the Q23 academy. He has also competed numerous times in Muay Thai and held the WPMF middleweight title.

Kayoom holds a decision win over BJJ legend Gregor Gracie. He beat the Brazilian by decision at ONE: ‘Destiny of Warriors’ which was the promotion’s inaugural event in Kuala Lumpur back in 2012.

Kayoom doesn’t just hold a black belt in BJJ. He also holds black belts in other martial arts. According to Evolve MMA this experience will help him develop a ‘holistic’ system for training,

The head coach role has previously been held by Heath Sims, Brian Ebersole and Siyar Bahadurzada. Kayoom will be working with some of the world’s most talented fighters.

The likes of Demetrious Johnson, Shinya Aoki, Xiong Jing Nan and Sage Northcutt use Evolve MMA as a base when they are competing in Asia. The camp has also hosted legendary grapplers like Marcus Almeida, Mikey Musumeci and Garry Tonon.

Evolve MMA was founded before ONE Championship and helped put Singapore on the global map as a destination for the world’s best fighters. UFC stars like Georges St Pierre, Rich Franklin, Rafael Dos Anjos and Henry Cejudo have all travelled to Singapore to train there.

There are currently five different locations in Singapore as well as the Evolve University which is an online database of training tips and techniques. The camp currently has numerous fights coming up with Nong-O set to defend his bantamweight Muay Thai belt at ONE on Amazon Prime 1, Amir Khan booked for ONE 160 and Ritu Phogat fighting at ONE 161. 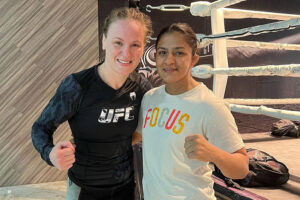