Demetrious Johnson has had plenty of time to prepare for Adriano Moraes. The flyweight title fight was booked to take place in February, 2020 and has been postponed several times.

It will finally go ahead at ONE on TNT on April 7th (US time) and Johnson is very familiar with the man he will be facing. It sounds like he knows exactly what to expect from the flyweight champion when they meet at the Singapore Indoor Stadium next month,

“Adriano is the champion for a reason. He’s very good at what he does and how he likes to go about winning his fights,” he said.

But Johnson believes Moraes’ approach can be overly cautious,

“He is good at getting the back, throwing on those long legs for a body triangle and looking for the rear-naked choke but, if you look at that, it’s a safe spot and his spot to burn time. There were times he got Geje Eustaquio’s back, and he’s sitting there hidden.” 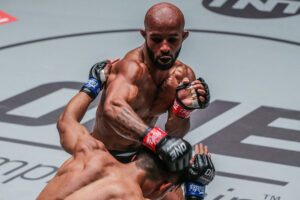 The former UFC flyweight champion believes his upcoming opponent has a tendency to cruise through fights. He thinks it is the biggest flaw in Moraes’ game,

“When I watch all his fights, he goes in to compete but he hasn’t really gone in to impose his will on somebody. That’s what he should be doing in all his fights.”

‘Mighty Mouse’ contrasts this with his own strategy which is much more forward thinking, 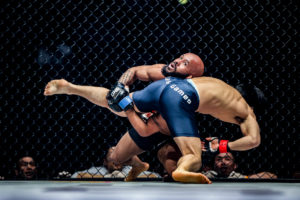 This will be the first ever ONE Championship card to be broadcast live on TNT in the US. There is an onus on the fighters to entertain, particularly the headliners, and Johnson intends to do just this,

“You’ve got to go out there and take risks because without risk there is no reward. You are being paid to fight and win, and that’s what I plan on doing.”

Given Johnson’s status as the greatest flyweight fighter in the history of the sport no-one would have complained if the 34 year old had been handed an immediate title shot after signing with ONE Championship. But instead he had to work his way through a flyweight Grand Prix and it is an achievement he is proud of,

“My experience in the Grand Prix was awesome. It’s something I really, truly wanted after watching Pride growing up and I got one of the belts that I’m most proud of.”

Another belt will be up for grabs at ONE on TNT. This strap already has an owner but Johnson is very confident of snatching it away from two time champion Moraes.

Johnson successfully defended his UFC flyweight title 11 times. That is a record that is unlikely to ever be broken and the American’s name will always be in the mix when fans are discussing who is the greatest mixed martial artist of all time.

Such discussions are always subjective but Johnson feels that, having won the UFC flyweight title, adding the ONE Championship strap to the collection would be the best way to underline his ‘GOAT’ credentials,

“I dominated North America for six years as a champion. Now the goal coming to ONE Championship, which is the greatest and best organization in the eastern side of the world, is to dominate and become a champion.”