Adriano Moraes has beaten four of top five flyweights. The only ranked fighter who has yet to lose to the Brazilian is Reece McLaren who is currently at #5 and coming off a loss.

There is nobody that Moraes has not already beaten but there is one fighter who has already beaten him. he is currently 1-1 with #2 ranked Kairat Akhmetov and believes the Kazakh could be next in line for a title shot,

“I believe that Kairat Akhmetov is closer now because we fought twice with one win each, so this trilogy would make perfect sense. But the decision is up to ONE Championship.” 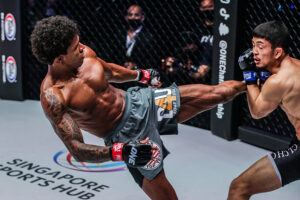 Having submitted Yuya Wakamatsu at ONE: ‘X’ the Brazilian admits that finding a new contender might be a bit of a struggle for the matchmakers,

“After the victory against Wakamatsu, I eliminated the top four in the rankings. So, I don’t know who will be the next to fight for the belt.”

Demetrious Johnson hasn’t competed in MMA rules since losing to Moraes at ONE on TNT last year. There is no sign that a rematch is in the works with the former UFC flyweight champion coming off a win over Rodtang Jitmuangnon at ONE: ‘X’. 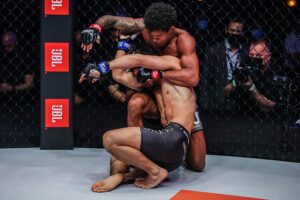 That was a mixed rules fight with the first round fought under Muay Thai rules and the second MMA rules. Moraes likes the idea and wants to do something similar himself,

“The fight with special rules was really cool. I loved watching Demetrious Johnson fight Rodtang. I see that kind of super-fight as an option too.”

He even has an opponent in mind. Moraes would like to be matched with reigning ONE Championship flyweight kickboxing champion Ilias Ennahachi,

“There’s the kickboxing champion, Ilias Ennahachi, a very tough guy, and he’s already shown interest in doing a fight with these rules. So why not? He’s a great striker, so it would be an interesting fight. But it would be even more interesting if it was just MMA.”