Demetrious Johnson recently appeared on The MMA Hour and was asked about the current state of the UFC‘s flyweight division. As the most successful 125lber in the promotion’s history his opinion probably carries more weight than most.

Deiveson Figueiredo and Brandon Moreno have fought each other three times in succession and a fourth match is in the works. The Brazilian currently holds the title but ‘DJ’ would like to see former champion Moreno fighting someone else,

“Why do a fourth fight? Like, why? Fight (Alexandre) Pantoja, Kai-Kara France. Fight somebody totally different! Go out there, get your mojo back if you feel like you need it and get a fresh look in front of you.” He was part of a trade that involved Ben Askren moving in the opposite direction. Johnson hinted that he was getting better paid in ONE Championship than any of the flyweights on the current UFC roster are,

Johnson recently beat Rodtang Jitmuangnon in a mixed rules bout at ONE: ‘X’. He hasn’t participated in an MMA fight for nearly a year but is coming off a loss to Adriano Moraes in a flyweight title fight. 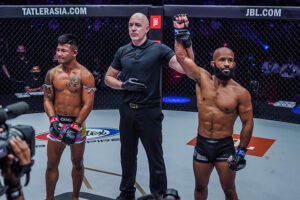 Johnson sounds extremely settled in his new home and lauded the atmosphere backstage at the ONE Championship events,

With fighters on the UFC roster facing legal action after altercations that took place well away from the octagon the comparison is particularly stark. Johnson says the relationship between rivals on the ONE Championship roster is much more friendly,

“We’re just chill. You see Angela Lee back there with her baby and Stamp there talking. I was talking to Adriano I was talking to Yuya Wakamatsu. We’re all athletes and we’re all professional.”