Agilan Thani is used to dealing with unrealistic expectations. He has established himself as arguably Malaysia’s top mixed martial artist with ten ONE Championship wins.

But he’s also had to deal with the weight of expectation that comes when the hopes of an entire nation rest on our shoulders. His 2017 defeat at the hands of Ben Askren elicited a reaction of surprise rather than sympathy, testament to the hype that the young welterweight had generated.

But in 2019 Thani finally started to live up to these lofty expectations. He beat Yoshihiro Akiyama, pushed Yushin Okami, another UFC veteran, all the way en route to a decision loss and then handed Dante Schiro the first defeat of his entire career.

The 24 year old acquitted himself well over the course of nine hard fought rounds in 2019 and is entitled to be happy with his year’s work,

“I think 2019 was very good. My goal was to fight two times (but) I fought three times (and) battled against former champions, current champions and dangerous newcomers. I don’t have any easy fights anymore (and) it feels so good that it turned out like this.” 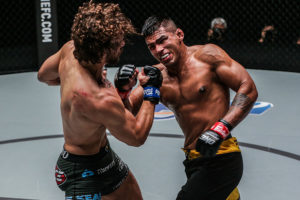 Having faced two UFC veterans and an undefeated newcomer you can cannot question the credentials of Thani’s recent opponents. Askren might have retired but the division is deeper than ever before and the Malaysian feels the increased competition is bringing out the best in him,

“One thing is obvious: since the day I signed (with ONE Championship) the division has gotten stronger which in turn has revealed all my holes. Right now, I have to get back in the gym and work on many things to improve my overall skill set so I can become a champion in the years to come.”

Thani tends to be brutally honest, particularly when it comes to assessing his own strengths and weaknesses. After back to back losses in the Axiata Arena he was relieved to register a win in that venue at ONE: ‘Mark of Greatness’,

“It feels good to win in Kuala Lumpur again. I’m going to be honest, I had a really big phobia fighting here because I lost my last two matches (and) I was nervous but I kept my cool.” Schiro came into last Friday’s fight with a record of 6-0. It was a big win for Thani but he still thinks there is plenty of room for improvement,

“It was a fight that I wanted to dominate from start to finish but I did not manage to do it. I was a bit sloppy here and there, and I rushed too much. But I learn new things every time and I picked up something new from this fight too.”

Thani prevailed by way of split decision. The 24 year old thinks there is one weakness in particular that allowed Schiro to make the contest closer than he would have liked it to be,

“I’ve got a lot of things to work on, as usual. I realized that I am giving my back away too easily, and this is something I really need to change moving forward.”

He is happy to have fought three times in 2019. But Thani has experience that goes beyond his years and he won’t be rushing to get back in action in the new year,

“Being a professional is not only about fighting consistently and winning fights; it is about looking after yourself, too. First I need to rest and after that I want to work on every skill and aspect of the sport. Then I want to come back and fight the top guys in my division.”