It has been 18 months since Joshua Pacio last stepped inside the ONE Championship cage. The reigning strawweight champion has not defended his title since 2020 but there are no shortage of contenders.

The Filipino feels the biggest threat to his reign could come from a familiar foe. Pacio has already fought Yosuke Saruta twice and the strawweight title was on the line both times.

With the Japanese star coming off back to back wins he feels a trilogy title fight could be next,

“It would be amazing if a trilogy takes place. We know each other well, we’ve faced each other twice. He knows my style and I know his. I think whoever’s improved the most since that second fight will win,” he said.

While Pacio has been on the sidelines for the past year and a half he has been keeping busy. The 25 year old feels he has improved since the last time we saw him compete,

“I think I’m leveling up, but at the same time he (Saruta) has also improved I’ve seen him beat Naito and he was really impressive.”

Saruta beat former champion Yoshitaka Naito at Road to ONE 3 last year. He’s won four fights out of five since signing for ONE Championship with the sole loss coming at the hands of Pacio at ONE: ‘Roots of Honor’.

Pacio sees improvement in Saruta but warns that he is on a similar trajectory himself,

“Of course, his confidence is rising, but my job as a world champion is to improve more, to improve better than your challengers.” 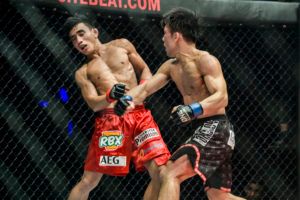 While Pacio singled out Saruta as being the main threat to his title reign there is another rising star in the strawweight division.

Bokang Masunyane holds a perfect professional record with two of his eight wins coming inside the ONE Championship circle. Pacio likes what he has seen of the South African,

“He’s very explosive. His athleticism is through the roof. He also has power in his hands,” he said.

Masunyane earned a ONE Championship contract after scoring some highlight reel slams at Pancrase 307. Pacio is impressed by the 27 year old’s recent performances,

“He’s a wrestler but I know he’s looking to become a well-rounded athlete and we’ve seen that against Rene Catalan when he scored that knockout. His explosiveness and athleticism make him a handful against anyone in the strawweight division.” 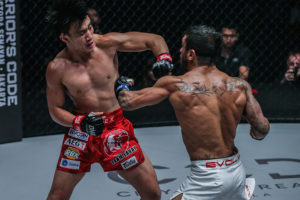 But while Masunyane is very much the new kid on the block Pacio can’t see past the title credentials of former for Saruta. He wants the trilogy match and hopes the matchmakers will hand it to him,

“For me, a trilogy is unfinished business. I’ll go for the trilogy against Saruta and after that, it could be Bokang or it could be anyone that they want me to face.”

Jarred Brooks: ‘I’m the best strawweight in the world’!