Alan Shearer was one of the most prolific goalscorers in the English Premier League during his heyday. Nowadays he is better known as a pundit who is a regular on Match of the Day but the former Newcastle United and England striker found himself in an unfamiliar environment this afternoon.

Shearer, 48, visited Impakt MMA in Hong Kong where he came face to face with ONE Championship heavyweight Alain Ngalani. Impakt MMA captured the moment in this Instagram post:

Shearer’s former England team mate Rio Ferdinand recently saw his hopes of competing in a boxing match nixed by the British Boxing Board of Control. Meanwhile Bixente Lizarazu, who was part of the French team that lost 1-0 to a Shearer goal in 1997, recently earned his BJJ black belt.

However there doesn’t seem much prospect of Shearer, who won the Premier League with Blackburn Rovers, following in these footsteps. While the reason for his visit remains unclear Impakt MMA do state clearly that ‘Alan Shearer will not be competing in ONE Championship’.

Shearer looks in great shape for a man rapidly approaching his 50th birthday. But few fighters can boast a better physique than Ngalani and the Geordie legend appears to be impressed by the biceps of the Hong Kong based heavyweight. 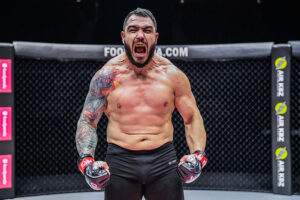 Mauro Cerilli stops Abdulbasir Vagabov in the second at ONE: ‘Unbreakable’ Part II