Amir Aliakbari has been waiting a while to make his ONE Championship debut. The Iranian heavyweight has seen multiple fights fall through but says morale is high ahead of his first fight for the promotion which is being broadcast this Friday,

“It was a little upsetting these cancelations happened. I was at the top of my game. I was mentally and physically prepared, but my training has not stopped. My morale has not wavered.”

He faces Kang Ji Won at ONE: ‘Fists of Fury’ Part II which will be broadcast on delay this week. Aliakbari has done his homework on the Korean who beat one of his teammates last time out,

“He is a good fighter. He is a good boxer and hits well, but he also gets hit. I believe I am stronger in every aspect of the fighting game, and any way this fight goes, I think I’ll be ahead.” 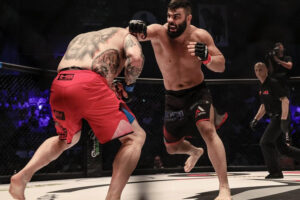 Aliakbari spent a lot of time at AKA Thailand during the start of his MMA career but is now back in his native Iran. He has faced some tough opponents, the only man to beat him is Mirko Crocop, and believes that will give the the edge over an opponent who is fighting for just the fifth time,

“I believe I am stronger in wrestling, striking, and even jiu-jitsu. In all aspects of this match, I believe I’m ahead.”

This doesn’t just apply to Won. Aliakbari believes he will be better than anyone in the ONE Championship heavyweight division,

“I am the most experienced, I’ve had the most fights, I’m the strongest, I’m mentally the toughest, and I am confidently saying that I’m the best fighter in this division, and I’m here to wipe out the whole division,” he said. Aliakbari has been outspoken about his ambitions of winning the heavyweight title. Having talked the talk the Iranian knows it is essential that he walks the walk at ONE: ‘Fists of Fury’ Part II,

Interestingly Aliakbari won’t have to wait too long for his second fight for the promotion. He is booked to face Anatoly Malykhin at ONE on TNT Part III in April. Reigning heavyweight champion Brandon Vera barely averages a fight every other year and the Iranian would rather stay busy than sit on the sidelines waiting for a title shot,