Amir Aliakbari is known as ‘The Iranian Beast’ and the 33 year old is hoping to live up to that nickname this week. He faces Anatoliy Malykhin at ONE: ‘Revolution’.

The Iranian believes the winner could be in line for a heavyweight title shot,

“I’ve studied him, I’m prepared for him, and I believe whoever wins this fight is positioned to fight for the belt. I believe it’s going to be a very fun fight, and I welcome the hard fights.” 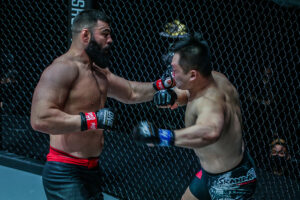 Malykhin has posted some fun videos of him training but Aliakbari plans to silence the Russian at the Singapore Indoor Stadium this Friday,

The Iranian is coming off a defeat on his ONE Championship debut. He was stopped by Kang Ji Won in the first round and blames a loss of focus,

“We lost focus. We just wanted to get the fight over with, so for this fight we have taken the time, we studied our opponent, and we are prepared for him,” Aliakbari says. 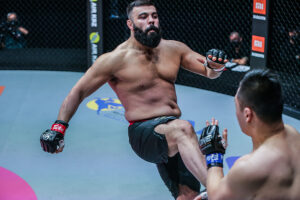 However Aliakbari is already looking beyond his next fight to a potential clash with the heavyweight champion Arjan Bhullar,

“You could ask any heavyweight, they all know that last fight doesn’t represent me. I’ll get past Anatoly, and I’m looking at Arjan.”

He is a wrestling world champion but Aliakbari believes he is capable of knocking Malykhin out,

“Anatoly is a wrestler with an overhand right, and that’s about it. I’m going to try to engage with him in grappling, which I welcome, but I believe I’m going to knock him out.”

Having won the world championship as a wrestler Aliakbari believes he is vastly superior to the other contenders at heavyweight,

“None of these guys are on my level. They are not even on the level of my pinky, and I’ll show that. I’ve won world titles, and these guys haven’t even gotten third place, so they don’t know what they are talking about. They are daydreaming and when they see me in the cage, starting with Anatoly, they’ll wake up real quick.”