Amir Khan has some serious business to attend to in 2022! The Singaporean lightweight has had to deal with issues on the health side and the personal side but is looking sharp ahead of his comeback.

Khan shared a photo of himself dressed to impress and announced he will be returning to the cage this year:

Khan’s father sadly passed away in 2020 and days later Khan lost by split decision to Dae Hwan Kim. It was a very tough situation for the Singaporean who did not fight at all last year.

He says he also underwent surgery to fix his injury issues. But the 35 year old is now ready to return to the age and says,

“I’ve decided to focus on what’s truly important to me and that’s MMA. I know now mentally, physically and spiritually I’m in sync .”

Khan is a veteran of 20 ONE Championship fights and has been on the roster since 2014. He was the first Singaporean to challenge for a title with the promotion

He went the distance with Eduard Folayang in that but dropped a decision to the Filipino. That was in 2018 but Khan is now on the comeback trail and ready to return to the cage this year. 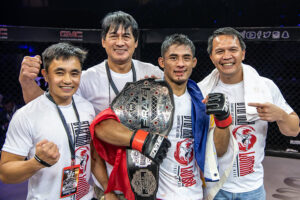