At 37 years of age Ariel Sexton is the oldest of the eight fighters in the ONE Lightweight Grand Prix. He thinks this experience will be key going into Friday’s quarter final matchup against Amir Khan,

“There are very few people in the world that are on my level in mat time and training time,” said the BJJ black belt.

Sexton made his pro debut in 2006 and thinks this gives him a huge advantage over younger fighters like Khan,

“Imagine how much training I’ve done in that time… I don’t think he’s had the time to catch up yet in some areas.”

However Khan has done something which Sexton hasn’t yet managed. The Singaporean earned a ONE Championship title shot and that is an achievement deserving of respect,

Sexton and Khan face off at ONE: ‘Call to Greatness’. The Costa Rican is four wins away from becoming the lightweight champion but, given the strength of the field, he still has a veritable mountain to climb.

Either Shinya Aoki or Eduard Folayang will be champion, depending on the outcome of their title fight at ONE: ‘A New Era’. Meanwhile Sexton will have to beat three of the top lightweights on the roster just to earn that title shot.

It’s a challenge, but one the Renzo Gracie protogee welcomes,

“I’ve been working hard in ONE for the last five years to get my opportunity to fight for the belt, now there’s no place for anyone to run and hide,” he said. In fact, Sexton feels fortunate to be involved in such an elite tournament,

“When they selected me to take part in the Grand Prix, I knew it was going to be hard. All the guys are elite, world-class and dangerous, and they all deserve to be there, so I feel honored to be selected.”

Despite the difference in age Sexton and Khan have a similar level of MMA experience. The former is a veteran of 16 fights while the latter has competed 15 times in his career.

So while Sexton had an eight year head start, at least in pro MMA terms, his opponent has almost made up for that lost time in a competitive sense. Khan has spent virtually his entire career with ONE Championship and it means there is no shortage of video footage for opponents to review. 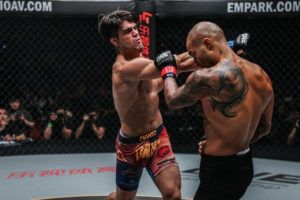 Sexton has been impressed by his opponent’s striking prowess but thinks it will be nothing he hasn’t seen before,

Despite holding a BJJ black belt the Costa Rican has become known for his striking, in particular a right uppercut that he is adept at firing off from unconventional angles. However he feels his grappling will come to the fore in Singapore,