Alyona Rassohyna’s last ten wins have all come by way of armbar. There is no secret to the Ukrainian’s strategy and she would love nothing more than to submit Stamp Fairtex at ONE: ‘Unbreakable’ Part III.

Rassohyna is up front about how she plans to finish her opponent at the Singapore Indoor Stadium,

“I’m very good with the armbar. I know how to do my job very well,” she said.

The event will be broadcast on Friday and Rassohyna’s fight with Stamp serves as the main event. With an atomweight Grand Prix about to get underway the stakes are high and the Ukrainian is hoping to make a big impression on her promotional debut,

“I think ONE Championship is one of the best organizations in the world and I’m ready to perform,” she said.

She might be known for her armbars but Rassohyna says there is more to her MMA game than just submissions,

“I am an aggressive fighter. I am good everywhere (and) I have good takedowns, cage control and transitions,” she adds.

After suffering back to back defeats in 2014 Rassohyna took a four year break from MMA in order to start a family. Since returning three year’s ago she has won two fights out of two, capturing a title in the process.

That pair of losses came at the hands of fighters who would go on to win titles with Invicta FC and Rizin. She went the distance with Seo Hee Ham but Rassohyna believes she is a much better fighter in 2020,

“I lost to the girls who are (some of the best) in the world but at that time I was not physically ready yet. I had a long break because I was on maternity leave, but now I’m back. I am a different fighter. I am stronger and ready to fight the best fighters in my weight category.” 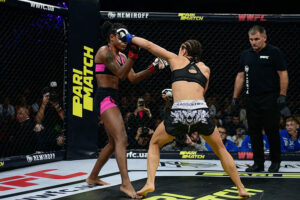 Stamp has previously held the ONE Championship atomweight kickboxing and Muay Thai titles and Rassohyna is impressed by her opponent’s credentials,

“She’s a good striker and has great defense. She can use her legs and elbows, and she’s aggressive with her low kicks. She’s a strong opponent,” she said.

Stamp currently sits at #5 in the atomweight rankings. Rassohyna wants to claim that spot and sees this fight as the perfect opportunity to crack the top five at the first attempt,

“I think it’s a good start in this organization. I think when I win this fight, I will be two steps ahead.” 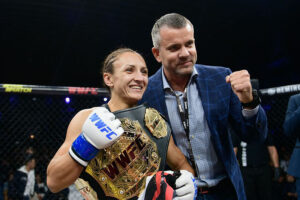 Stamp was 13 when Rassohyna made her pro debut. The 30 year old is much more experienced than her opponent, at least in MMA terms, and is confident she will finish the fight in under five minutes.

“My grappling and transitions are better than Stamp’s. As usual, I will win in the first round with an armbar.”

Having spent the vast majority of her career competing in the old Soviet Union this is an opportunity for Rassohyna to strut her stuff on a more global stage. She is determined to make a success of her ONE Championship career and already has her sights set on the atomweight title,

“I want to get the belt. It is going to be the big success, not only for me, but for my gym and my country. It is important for me.”