With or without his bantamweight belt on the line, Kyoji Horiguchi approaches every assignment with a championship mindset. His title won’t be on the line at Rizin 18 but he is taking opponent Kai Asakura extremely seriously.

“It’s a still fight for me. Whether the titles are at stake or not, I have to show up in my best form possible,” he said through a translator.

“He is young, and young fighters like him are hungry and determined. They want to make names for themselves at my expense, I am not going to allow that.”

Holding a professional record of 12-1, Asakura is undefeated in Rizin since making his promotional debut in December 2017. He owns victories over the likes of Kizaemon Saiga, Manel Kape, Thanongsaklek TigerMuayThai and Jae Hoon Moon.

Even the promotion admitted that this could be considered a mismatch, given Horiguchi’s stellar reputation. But the 28 year old sees things differently,

“He earned his way to be here. He wants to prove his worth, and I am willing to give him the opportunity,” Horiguchi said.

Asakura was supposed to fight UFC veteran Ulka Sasaki at Rizin 15 last April, but the latter pulled of the bout due to an injury that he sustained in training. Replacement Justin Scoggins subsequently pulled out too.

Instead Asakura finds himself facing the champion. He’s going in with the best bantamweight Japan has produced and Horiguchi knows he will need to be on top form to beat his compatriot,

“I am not taking him lightly, that’s for sure. I am always prepared to face the toughest challenges in my MMA career. I am here to fight the best to become the best. It’s a non-title fight, but I still plan to showcase the best version of myself against Kai Asakura,” he assured.

Horiguchi believes that his performance against Asakura will serve as a good barometer of exactly where he currently sits in the bantamweight rankings, with many believing him to be the best in the entire division,

“Asakura is one of the most talented prospects in sport out there. It is a good fight to see where I am at and who’s going to be next,” he said.

Horiguchi also knows that a win would guarantee Asakura a rematch with a title on the line,

“There are a lot of guys who want a shot at my belts, and Asakura is one of them. Unfortunately for him, any of these titles aren’t on the line in this fight. That’s the sad part, but the good part is that he has the chance to prove that he really deserves to be next in line for these straps,” Horiguchi added. 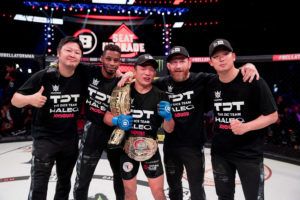 It is difficult to compare the careers of bantamweights contracted to different promotions. By beating the best from both Rizin and Bellator he has staked a very credible claim to be the best 135lber in the game.

It’s a conversation Horiguchi is well aware of and he wants to underline his status as the best bantamweight in the business with a convincing win on Sunday,

“I never want an easy fight. Every opponent brings in a unique set of skills. That’s why I respect Kai Asakura as a competitor. My only desire is to be the best fighter in MMA. Every fight is a test, and every fight is an opportunity to be the best.”