Kai Asakura is a name that has been on the lips of anyone that follows the Asian MMA scene closely. The bantamweight’s 12-1 record has been compiled at the expense of some credible opponents and he has avenged his only loss.

But he is not regarded as being one of the best bantamweights in the world. Which might explain why so few people give him a chance of beating Kyoji Horiguchi.

As Asakura goes into the biggest bout of his career at Rizin 18 he took a moment to acknowledge his opponent’s achievements,

“I respect him. It’s an honor to face a fighter like him. I believe he is the best bantamweight in the world right now. For sure, he will go down as one of the greatest Japanese fighters of all time.” 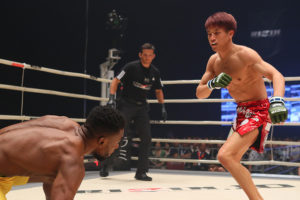 Although Horiguchi’s belt will not be on the line Asakura says he has been guaranteed a title shot should he merely manage to make it a competitive contest,

“It’s a must-win against me. But it’s a win-win situation for me. I have everything to gain in this bout. It’s a chance to prove that I belong to the elite level of the sport, not just in Japan. If I win, I will have the assurance of having a title shot. If I make it competitive against him, a title shot will also be given.”

That guarantee underlines just how low expectations are but Asakura believes he has earned the right to share a ring with Rizin’s biggest star,

“Many believe that I just made a shortcut to be here. But come to think of it, I fought and won four fights in Rizin. Nobody is willing to step up, so I took it. It may be a non-title fight but I prepared for it like a title fight because I am fighting Kyoji Horiguchi.” He saw two matchups at Rizin 15 fall through meaning it has been eight months away from competitive action for Asakura. Seeing fights with Ulka Sasaki and Justin Scoggins nixed at the last minute was a setback and the 25 year old is just happy to know he will be back in the ring on Sunday,

“I’ve been out of action for months and I am excited. My last fight got cancelled (and) I was so disappointed but thankfully it led me to this moment. I appreciate Nobuyuki Sakakibara for giving me this fight.”

Asakura is well aware that comes into this contest as an underdog. But he’s not short of confidence and hopes to spring a major upset on Sunday,

“I had a good training camp. I am confident that I can give him a good fight. I am here to surprise everyone.”