Aziz Calim took a fight against Roshan Mainam at very late notice. The Saudi Arabian born, Indonesian based flyweight stepped up to the plate when one of his teammates was forced to withdraw from ONE: ‘Fists of Fury’ Part III at the last minute.

Abro Fernandes was unable to obtain a visa in time and Calim says he had no hesitation in accepting the  match against Mainam which will be broadcast on Friday.  The 23 year old had already played an active part in his teammates training camp,

“I was chosen due to my physical readiness. I also helped Abro in his preparation ahead of this Roshan bout, so I will use what I had learned from his drills in my fight,” he said. 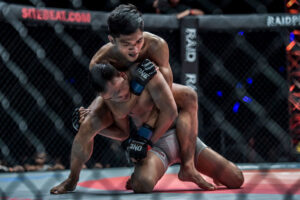 It was too late in the day to formulate a game plan but Calim plans to subject the Indian to a barrage of strikes,

“We haven’t fully completed the game plan because I am the replacement fighter and this is very short notice. However, I will go heavy on the striking like I always do.”

Calim says there was time to work on a few drills ahead of the fight at the Singapore Indoor Stadium,

“Mostly, I pushed myself hard on the striking and discussed more on the strategy, while also doing some drills on my ground defense to anticipate Roshan’s movements,” he said.

Mainam is a wrestler and Calim is very confident that he will have an advantage if he can keep the fight standing,

“I see that he’s lacking in striking. I believe that I have the better abilities in terms of stand-up fighting than what he has at the moment,” he said. 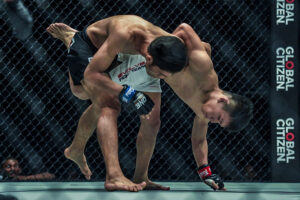 He does sound wary of Mainam’s wrestling but has been working hard on this side of the game with Fernandes,

“I am concerned about his ground and wrestling skills. However, I still think that with the drills I (did) to assist Abro, I feel that I can deal with his ground game.”

Kalim has taken note of the Indian’s physique and believes Mainam will fade down the stretch,

“(He) has a big but short posture. Those kinds of people are often easily exhausted. My plan is to maintain the distance with my striking up to round two, where he will be a bit more tired to fight.” 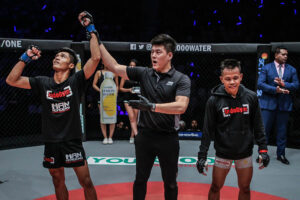 Keeping the fight standing will be key. Calim believes that luring Mainam into a stand up battle is the perfect strategy,

“I will definitely use my striking prowess and will try to stall time and lure him into exhaustion,” he said.

He was born in Saudi Arabia but Calim says he will be representing Indonesia in this bout. He wants to win by KO but will just be happy to show the improvements he has made in recent months,

“I will do my best to represent Indonesia in this bout. I want to use my boxing (and) show different skills, while also showing that I have become sharper in my techniques.”