Wondergirl Fairtex is looking to compete in a new sport. The Muay Thai star has already started training ahead of a potential MMA debut.

She is taking the transition so seriously that her team has already had her compete in two different BJJ tournaments,

“That’s why I came to train at Fairtex, because I want to fight in MMA. I haven’t fought in MMA yet, only in (two) BJJ tournaments.” Her Muay Thai credentials would probably make Wondergirl the best striker in a strawweight division that is dominated by grapplers. Her takedown defence would need to be on point but the 22 year old confirmed she would be willing to face any opponent,

“If I have the chance to fight in MMA, I will fight anyone.”

She recently discussed the possibility of fighting her sister, Supergirl Fairtex, and said that,

“Many people ask me about that. I used to talk with my sister about it and she said, ‘oh good, we’ll both get paid!’.” While Wondergirl might not be serious about putting on ONE Championship’s first ever sibling super fight there is one matchup she definitely wants,

“If Muay Thai, I want to rematch with Jackie (Buntan).”

Wondergirl suffered some serious facial injuries after being knocked down by the American in the opening round at ONE: ‘Fists of Fury’. She made it to the final bell but never recovered and would love another opportunity to test herself against Buntan,

“Jackie Buntan, congratulations on your last two bouts you did a great job. I just want to say that now I am on (my way to) recovery it would be an honor to rematch with you. You’re a good fighter.” There is a silver lining for Wondergirl. While being unable to train was frustrating it did allow her to get some valuable rest and recuperate from other niggling injuries,

“It was hard because I still wanted to train like usual, not go easy. That was kind of a bit boring but it was good for my recovery. Every injury just healed up because I took a rest.”

Stamp Fairtex has set the blueprint for female fighters who want to transition from Muay Thai to MMA. Wondergirl trains with her every day and wants to follow in her footsteps. 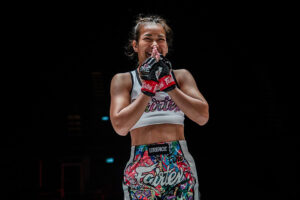 She confirms that Stamp has been a major influence on her,

“For me, Stamp is smaller than me but she is my idol.”

But having refused to rule out a fight with her sister Wondergirl also left the door open for a potential fight with Stamp. The size difference could be an issue but when asked whether the two could fight she was noncommittal,

How much appetite there is from the fans to see Fairtex fighters to be matched with another remains to be seen. But Wondergirl is on the comeback trail and could be competing in either MMA or Muay Thai in her next fight.