Roshan Mainam has made the perfect start to life with ONE Championship. The Indian has two submission wins out of two and will be looking to make it three in a row this Friday.

He faces late replacement Aziz Calim at ONE: ‘Fists of Fury’ Part III which is being broadcast on delay. The Indonesian stepped up at the last minute when teammate Abro Fernandes was unable to get a visa.

But Mainam is already familiar with his Indonesian foe,

“Calim debuted in ONE Championship before me. He has represented his country in many fights before this. He is a tough opponent with lots of experience. I will try my best to give a great performance.” Having finished his first two ONE Championship fights inside the distance the Indian wants to make it a hat trick of stoppage wins this week,

“I will try to finish the match as soon as possible. I would like to finish it in the first round. Going forward, I am looking to use my striking more in my matches.”

He comes from a wrestling background but is based permanently in Singapore. Mainam trains at Evolve MMA and says he has made huge improvements since leaving his native India,

“The level of training here is quite different and a notch above the rest. I have trained hard and tried to take myself to the next level,” he said. Whereas his opponent only found out he would be fighting a few days in advance Mainam has had months to prepare and promises he will be be ready,

“I am really excited for this match because I got this fight at the beginning of the year. I have been working hard since my last match, and I am ready for this challenge. I am geared up for a good performance,” he says.

Calim has been submitted by two opponents in his MMA career including Mainam’s teammate Ryuto Sawada. It is a statistic that the Indian is very aware of,

“I never take any fight lightly. He has a good understanding of both striking and ground game (and) has showcased good clinching, grappling, and ground skills in his matches. He is a well-rounded opponent (but) he has lost some of his matches by submission. I will try my best to finish him by either submission or striking.” 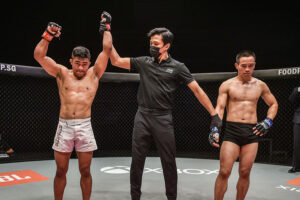 Teammate Ritu Phogat has also made an undefeated start to life with ONE Championship. The promotions ambitions in India appear to have been curtailed, at least for the time being, by Covid-19.

Mainam hasn’t managed to fight more than once in a calendar year since 2018. His career has been disrupted but he has found a home at Evolve MMA in Singapore and is hoping to make waves in his homeland with a third ONE Championship win,

“I would like to make my country proud this year. I am training with world-class fighters here and I have improved in my last two matches and I would like to continue doing the same this year, too.” 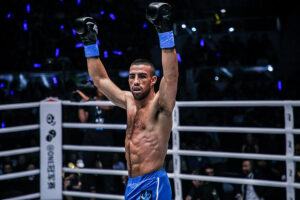