ARC 001, a joint venture between Road FC and AfreecaTV, kicked off on May 23rd in Seoul. The night was filled with spectacular brawls and highlight finishes from some of the top prospects on the Korean MMA scene.

The main event was a sloppy yet fun fight where Bae Dong Hyun outlasted and pounded out Heo Jae Hyuk in the final round. Most of the exchanges were contested in the clinch with lots of dirty boxing and body shots.

There were occasions where they did separate and throw wild punches but most were either diverted or did not land flush. It was Heo who had the most significant moments throughout the fight, right up until the finishing sequence.

In the first, he dragged Bae to the canvas toward the end of the round and dropped solid punches that had his opponent in survival mode. Then, in the second, Heo swung a looping overhand left, and Bae collapsed yet overcame the barrage. 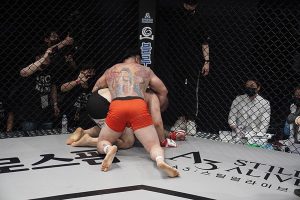 Heading into the last frame, Bae looked to be down on the judges’ scorecards. With both individuals lasting on fumes, the wild exchanges were exciting to watch but nothing much was landing with power.

Then, Bae spun to the side while tangled in the clinch. Heo lost balance and dropped to the ground from fatigue. Bae jumped on top and put everything into his punches to end the fight.

Even though Heo tried to stand back up, it was too late and the referee jumped in. Unfortunately for Heo (1-3), that is his third straight loss via knockout while Bae (3-1) gets back into the winning column after losing his first as a professional late last year. 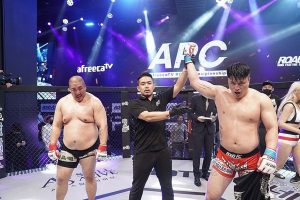 Nandin-Erdene and Kim Se Yeong stepped into the cage for a catchweight co-main event and it was the Mongolian who used his patented power striking to earn the fastest finish of the night.

When they met at the center, Kim looked tentative and hesitant from the start. Nandin-Erdene pressed forward to close the distance and crushed a knee into the head. Kim dropped after a right hand connected to the body. All Kim could do is cover up while his opponent continued with the barrage of punches until the ref stopped the contest.

Nandin-Erdene extends his win streak to four and moves to 12-6 overall. Kim, on the other hand, drops to 6-4 but should not hurt his standing as a featherweight contender since the fight was at 75kg catchweight.

Some other outstanding performances came from newcomers Min Shin Hee (1-0) and Davron Kholmatov (1-0). Min connected with a devastating flying knee that debilitated Kim Ha Hun in the curtain jerker while Kholmatov smashed combinations on Zombie MMA’s Hong Seung Hyeok to end the fight in less than 90 seconds.

The fight of the night has to go to the bantamweight clash between Ji Young Min (2-2) and Kim Yun Joong (0-2). It was a three-round stand and bang transaction with both fighters being hurt badly and trading with reckless abandonment.